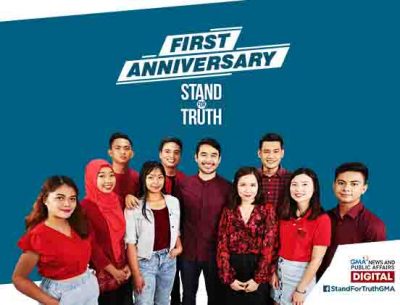 GMA News and Public Affairs’ pioneering mobile journalism newscast “Stand for Truth” marks its first anniversary with huge increase of views, making it one of the netizens’ preferred sources of news.

These broadcast journalists are not daunted by the challenges of using only their mobile phones in coming up with reports. In fact, most of SFT stories have been used by mainstream newscasts and paved the way for authorities to take actions on issue raised in some reports.

It is no surprise that more and more netizens turn to “Stand for Truth” as their source of news online. Last February, it recorded total views of 55 million on GMA News’s Facebook page.

Meanwhile, Izzy Lee’s story on “Patay sa Gluta,” about a 33-year-old woman who died after allegedly receiving glutathione injections, gained 2.4 million views as of this writing. And as the entire Luzon continues to be in enhanced community quarantine, netizens also turned to Anthony Esguerra’s story on “Buhay Quarantine.” It already has 2.3 million views on Facebook.

“Stand for Truth” launched its own Facebook page last February and already has 31,000 followers and recorded 3 million total views to date.

Various segments also recorded high number of views on YouTube. Last February, “The Mass Cremation in Wuhan” segment got 400, 000 views and “Inside Wuhan” with 208,000 views. More segments attracted netizens in March topped by Lagarde’s “Lockdown sa Italy” with 467,000 views and “Sugadol’s Malunggay vs NCOV” with 425,000 views.

For the past weeks, while most regular programming on television has been put on hold, “Stand for Truth” has been a source of credible and breaking news, most especially on topics concerning the COVID-19 pandemic through regular updates on its Facebook page.

Last March 30, it returned to live streaming. It airs every night at 8:30 p.m. via its Facebook page, as well as GMA News’ and GMA Public Affairs’ YouTube channels.