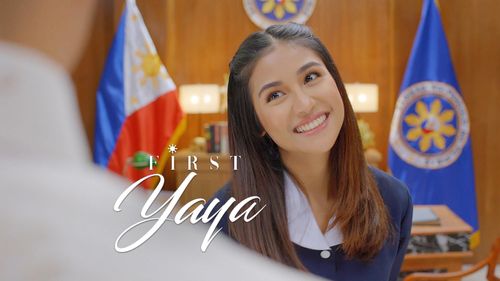 GMA’s lineup of programs for 2021 is rife with soaps and drama shows.

Viewers welcome the return of “Magkaagaw” starring Sunshine Dizon, Klea Pineda, Jeric Gonzales, and Sheryl Cruz. Next up is the heart-tugging story of “Babawiin Ko Ang Lahat” top-billed by John Estrada, Carmina Villaroel, and Pauline Mendoza. The well-loved tandem of Rita Daniela and Ken Chan returns to the small screen on “Ang Dalawang Ikaw” and is joined by Ana Vicente.

Viewers should also watch out for the riveting legal drama “Artikulo 247”; the multi-layered rivalry of three sisters in “Las Hermanas”; the weekly drama series “Love Connections” and the story of the little person who one day discovers that she is an heiress despite growing up from a poor family in “Little Princess.”

Seasoned actor Gabby Concepcion is paired with Sanya Lopez in the rom-com “First Yaya.” It follows the story of the Vice President of the Philippines (Gabby) who will later assume the presidency and his blooming romance with Yaya Melody (Sanya), the nanny of his children.

Another breakthrough cultural drama series from the GMA Entertainment Group this 2021 is “Legal Wives” where Dennis Trillo takes on the role of Maranaw Muslim royalty Ishmael who has three wives, played by Alice Dixson, Andrea Torres, and Bianca Umali.

Lovi Poe and Benjamin Alves reunite on primetime in the rom-com series “Owe My Love.” Produced by GMA Public Affairs, “Owe My Love” narrates the story of a financially illiterate woman and a miserly doctor whose lives intertwine when the former gets indebted to the latter.

GMA Public Affairs is also set to bring “Lolong,” inspired by the world’s largest crocodile in captivity of the same name. Joining Ruru Madrid in the series are Arra San Agustin and Shaira Diaz.

Sure to keep viewers glued to the screen every weeknight is the sweeping romance drama “I Left My Heart in Sorsogon” starring Heart Evangelista-Escudero. It dwells on the story of a young woman whose status as a fashion socialite is shaken up after returning to her hometown, rediscovering her roots, and rekindling her love for family, community, and an ex-flame.

Viewers will also be delighted with the return of “I Can See You.” Other upcoming soaps to look forward to are “To Have & To Hold”; “World Between Us”; “Love. Die. Repeat.”; and “The Witness.” On weekends, adventure awaits viewers in the action-packed family drama “Agimat ng Agila” featuring Senator Bong Revilla Jr. GMA also brings back “The Clash Season 4” and “Centerstage.”

Everyday people will take on the challenge of a lifetime in “Catch Me Out Philippines,” with Jose Manalo with Kakai Bautista and Derrick Monasterio. A new breed of talented artists who can make beautiful music together are also set to be discovered in “Sing For Hearts.”

Viewers are also in for a treat with new program offerings from GMA News TV: the fantasy-romance series “The Lost Recipe,” featuring Mikee Quintos and Kelvin Miranda and “Flex” with Mavy Legaspi, Lexi Gonzales, JD Domagoso and Althea Ablan.

The much-awaited on-screen team-up of real-life couple Gabbi Garcia and Khalil Ramos is all set in the romance-mystery mini-series “Love You Stranger.” Meanwhile, “Game of the Gens” fuses singing, dancing, and playing games among competitors from different generations. The fun will be amped up by hosts Andre Paras and Sef Cadayona, together with comedians and performers called GenDolls.

GMA Network further elevates TV viewing experience with its most recent offering, GMA Now, a mobile digital TV receiver that can be plugged into an Android phone and allows viewers to watch TV on the go for free and to enjoy a bunch of interactive features at the same time.

The Kapuso Network also extends its Serbisyong Totoo to Filipino learners across the country as it provides a free digital channel for the Department of Education’s blended learning program. DepEd TV will soon be available on GMA Affordabox’s Channel 7.

Finally, the country’s number one network returns to sports broadcasting as GMA signs a landmark deal with the National Collegiate Athletic Association (NCAA), the Philippines’ first athletic league, for NCAA Season 96 to 101 (2020-2026). NCAA fans can soon catch the games on GMA News TV, GMA Pinoy TV, and via online streaming on GMANetwork.com. The Men’s Basketball Finals is also set to air on GMA-7.

Will Calma stay with the Stags?