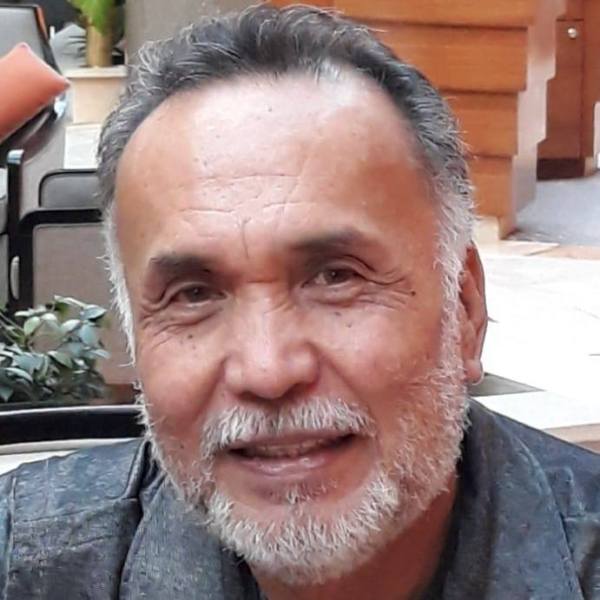 Friends were alarmed when he posted “Goodbye” on Facebook on Wednesday, March 25. Later, it was learned that Cobarrubias was at the Asian Hospital fighting for his life. He had pneumonia, and was tested for COVID-19.

He did not live to see the results as the actor passed away Thursday morning.

The seasoned actor worked on stage and on the screen. He got his start in 1974 when Behn Cervantes cast him in Ricardo Demetillo’s “The Heart of Emptiness is Black.” He continued working as a professional theater actor while also starring on films and TV. He starred in several notable projects, including “Sakada” (1976), “Orapronobis” (1989), “Bata, Bata Paano Ka Ginawa?” (1998), “Hele Sa Hiwagang Hapis” (2016), “Signal Rock” (2018), and “Kung Paano Hinihintay ang Dapithapon” (2018).

He starred in Lino Brocka’s “Jaguar” (1979), where his performance as the carefree and rich boss of Poldo (Phillip Salvaror), Sonny Gaston, won him the Gawad Urian Best Supporting Actor Award. He won the 2014 Best Actor trophy at the QCinema International Film Festival for his performance in “Mauban: Ang Resiko,” directed by Lemuel Lorca.

“Thank you, Tito Menggie. It was always a fun set when you are around. You always joke around and make everything light,” Alix also wrote on Facebook. “You were always available and there is no small role for you – you were always excited to be part of my films. Lagi mo pong sinasabi na paborito kita aside from Tita Anita. At dapat nasa pelikula kita lagi.”

Jason Paul Laxamana, writer-director, asked for prayers for the actor. He also said: “He was supposed to be a part of the cast of PENDUKO. Rest in peace, sir.”

Actress Irina “Ina” Feleo also wrote a touching tribute on her social media account: “You were such a kind soul. You were for me the best actor in ‘Dapithapon.’ A quiet presence. I feel your loss today.”

Menggie was born on August 10, 1951. He finished school at the University of the Philippines, where he studied Theater Arts. He was together with his wife, Gina, for three decades.

“Goodbye my love. Thank you for the 30 wonderful years. I love you. Dear God, please give me the strength to be able to face this very difficult moment of my life,” wrote Gina Cobarrubias on Facebook. –GFCT