Their series “Make It With You” has bid adieu, but the tandem will have another show, said Liza’s manager, Ogie Diaz.

There appears to be a baby boom in local showbiz amidst the pandemic.

John Prats and wife Isabel Oli are expecting their third child. They already have a daughter and a son.

Meanwhile, Billy Crawford and Coleen Garcia, who are expecting their first child, describe their feeling as magical every time they notice Coleen’s tummy getting bigger.

Comedian Bayani Agbayani and actress Bea Alonzo are both overwhelmed with the birth of Bea’s first pamangkin with younger half-brother James Carlos. James is married to Bayani’s eldest daughter, Thalia, a chef.

Mark, 33, and Nicole, 26 are Kapuso talents who met and fell in love during the taping of the series, “Bihag,” last year.

“It was a whirlwind courtship,” said a friend of the couple. “Since they obviously felt the same for each other, hayan at kaagad na naging sila.”

Will wedding bells ring for them soon?

“We are hopeful,” replied Mark, who has a daughter from a previous romance. 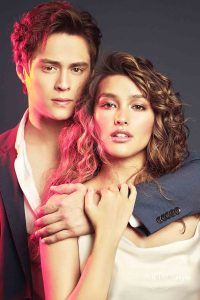 It’s farewell to “Make It With You,” the ABS-CBN series starring Liza Soberano, Enrique Gil, and Ian Veneracion, plus Katya Santos.

The primetime series had Cathy Garcia-Molina, Mae Cruz-Alviar, Theodore Boborol, and Richard Arellano at the helm.

“Make It With You” was partly shot in Croatia. It’s where Liza and Enrique’s characters Billie and Gabo first meet.

The series was doing well until the sudden shutdown of ABS-CBN. Fans expected it to be back, just like “FPJ’s Ang Probinsyano,” which will return on the Kapamilya Channel on cable beginning June 13.

He did not state the reason for the series’ discontinuation.

The veteran star plays the mom of Joey Marquez, who is married to Sylvia Sanchez in the series. Joey and Sylvia have several children, played by JM de Guzman, Maris Racal, and Kiko Estrada, among others.

Perla said she was able to give her house a thorough cleaning in the nearly three months of quarantine. “Naghahanap pa ako ng pwedeng gawin. Mabuti nga at nililibang pa ako ng aking mga apo. But I have to admit that we can only do so much,” she said.

Perla and husband live with their only son Jude and his family in Mandaluyong.

Few know that Piolo Pascual owns a farm in Mabini, Batangas, where he spent the lockdown.

“Mabuti my mom is in town, kaya sinamahan niya ako,” he said.

Piolo’s mom lives with one of his sisters in the US.

He had to report to “ASAP Live,” ABS-CBN’s Sunday show. All of the performers there made sure to practice social distancing.

Piolo, aside from being an actor, singer and recording artist, is also a producer of Spring Films with talent manager Erickson Raymundo and director Joyce Bernal. They originally planned to produce at least three films.

Someone who works at Spring Films said the owners provide them financial support during the time that they were all inactive.

“They understand that we have a family to support. Ang babait nila,” our source said.