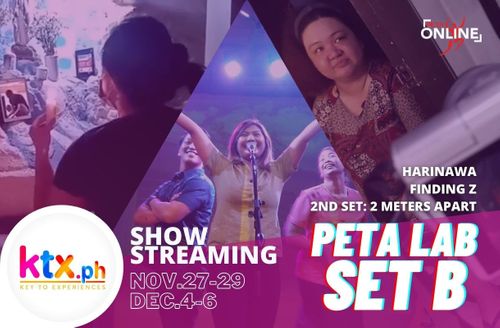 Ten years since its maiden staging, the hit musical “Care Divas” is back to make audiences laugh and cry as it brings the struggles and funny adventures of a group of caregivers in Israel.

Get reacquainted with Chelsea (Melvin Lee), Shai (Vincent De Jesus and Ron Alfonso), Thalia (Dudz Teraña and Jason Barcial), Kayla (Gio Gahol, Jerald Napoles, and Ricci Chan), and Jonee (Thou Reyes and Phil Noble), OFWs who trade the scrubs they wear by day with fabulous, shimmering outfits as they transform into drag queens by night.

Relive the glory of the Palanca Award-winning musical “1896,” PETA’s first and only purely sung musical production. Staged in the run-up to the Philippine centennial celebrations in 1998, it starred Ariel Rivera as Emilio Jacinto, Rody Vera as Andres Bonifacio, and Bodjie Pascua/Lionel Guico as Emilio Aguinaldo and Noel Cabangon as Jose Rizal. It was directed by one of the country’s theater greats, the late Soxie Topacio, and written by Charley dela Paz with music from Lucien Letaba.

Those looking for fresh productions can catch the premiere of PETA Laboratory Sets A and B, two new collections of plays that mirror pandemic-era Philippines, bringing into focus the new normal that Filipinos must live with—from mask-wearing, working from home, to the grim reality of isolation.

Meanwhile, PETA’s stories of survival and the people who have labored to keep the story of the country’s groundbreaking theater company alive take the spotlight in “Living Voices.” This documentary brings together the living voices from the company’s different generations—from its conception to its triumphs and trials.

State regains security control at UP