Korina Sanchez reveals that like several other well followed programs in ABS-CBN, her show, “Rated K,” will no longer air. 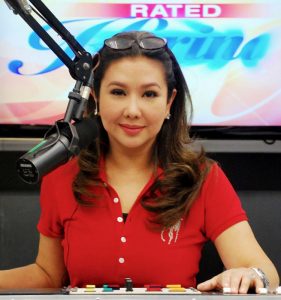 Several documentary shows of the current affairs division of the network will also stop airing.

Korina plans to devote more time being wife to Senator Mar Roxas and mom to their twins, Pepe and Pilar.

Her eldest son, Pancho Magno and wife, Max Collins, have just given her a grandson, Sky Anakin.

Sky Anakin was born on July 6. Max had a home birth and Pancho, who is a registered nurse, assisted his wife.

Economist and columnist Solita “Winnie” Monsod is on primetime as host of “Newsmakers,” which airs every Monday on GMA News TV.

The 79-year-old educator used to be head of National Economic and Development Authority and is married to Atty. Christian Monsod.

In “Newsmakers,” she will be tackling the most controversial issues and interviewing personalities via online video conference. She will also show her lighter side, as she tries out TikTok.

The couple have two elder kids, both boys, Primo and Leon.

When asked if they want to add to their brood, the Arellanos just smiled.

Will Viva Films have an entry in this year’s Metro Manila Film Festival (MMFF)?
Viva produced last year’s MMFF top grosser, “Miracle In Cell No. 7,” topbilled by Aga Mulach, Bela Padilla, Joel Torre and JC Santos, plus child actress Xia Vigor, who was introduced in the movie. It was directed by Nuel Naval.

In any case, here are the four official entries announced by the Executive Committee of the MMFF: “Praybeyt Benjamin 3,” with Vice Ganda, to be produced by Star Cinema; “Magikland,” which Christian Acuña reportedly will direct; Regal Film’ “Ang Mga Kaibigan Ni Mama Susan,” starring Joshua Garcia, with Chito Roño at the helm; and “The Exorcism of My Sissums,” starring sisters Toni and Alex Gonzaga.

Toni’s own production company, TinCan, will produce “The Exorcism of My Sissums,” with Fifth Solomon at the helm.

We heard that TBA productions has an entry, too, titled “Sundo,” to be directed by Victor Villanueva. TBA, of course, is the producer of the movies, “Goyo” and “Heneral Luna.” It had an entry in last year’s MMFF, “Write About Love.”

Senator Bong Revilla will soon be back at work on his GMA 7 show, “Agimat ng Agila.”

He will be paired with Sanya Lopez, whom he has yet to meet in person.

Sanya, of course, is the younger sister of Jak Roberto, a favorite on GMA. The boyfriend of Barbie Forteza, Jak has the most assignments among his colleagues.

Sanya, 23, gained media attention when she played Lorna in “The Half Sisters” in 2016.

The actress admits she is an admirer of Senator Bong and looks forward to meeting him in person, too.