She was supposed to do two new shows for the Kapamilya Channel, but when they were shelved, the 25-year-old actress has decided to put her time to good use.

While waiting for a new assignment from the Kapamilya Channel, Julia Montes has decided to put her time to good use. 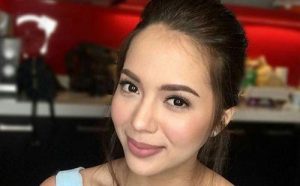 Julia, 25, was originally scheduled to do two series with the Kapamilya Channel.

“Both projects would have been produced by Dreamscape Entertainment. However, they were shelved following the nonrenewal of the franchise of ABS-CBN, where they were supposed to air,” our source said.

Julia spent a good part of last year in Germany, bonding with her dad, who left her in the Philippines when she was a baby.

When it comes to her personal life, Julia and action star Coco Martin are said to still be very much in love.

The actress was seen enjoying with the Ataydes in their out-of-town trip.

During the trip, they all made sure to observe social distancing.

While Maine, who is Kapuso, is busy, as she has a regular weekly comedy show with Vic Sotto, “Daddy’s Gurl,” Arjo has been without work since the shutdown of ABS-CBN.

Arjo’s mom, actress Sylvia Sanchez, has also stopped working since she was infected with COVID-19.

It’s his sister, Ria, who is busy with a new show on TV5, “Chika BESH,” with Pokwang and Pauleen Luna.

A graduate of Broadcasting from the De La Salle University, Ria is a Star Magic talent who got her first break in the drama series, “My Dear Heart.” She also showed her acting chops in “Ningning.”

***
Former child actress Harlene Baustista is in love again. She is in a relationship with businessman Federico Moreno, the son of the late German Moreno.

The two recently posted their date night to mark the first month of their relationship.

Federico is separated from Shiela Magdayao, a sister of Vina Morales and Shaina Magdayao.

Before Romnick, Harlene was with director Rico Gutierrez, with whom she has a son. She was also seen dating businessman Neil Eugenio last year.

Harlene is a successful restaurateur and an enterprising film producer. She owns and run Heaven’s Best Entertainment, which produced the award-winning movie, “Rainbow Sunset” (2018).

***
Aside from the online series titled “You, Me, Maybe,” Erich Gonzales is set to start work on a new teleserye, “Magdalena,” with JC de Vera as her leading man.

“Sunday Kada, Kada Sunday” is the brainchild of Bobot Mortiz, who was director for many years of the ABS-CBN gag show, “Banana Split,” which later became “Banana Sundae.”

Aside from JC, two other “Banana Sundae” mainstays, Angelica Panganiban and John Prats, are not joining the TV5 gag show.

“All three stars are grateful to Direk Bobot, who regrets that they cannot work together but is nonetheless happy that they have new shows,” added our source.

Reshaping consumer engagement: working with the Filipino youth as our co-creators