At 36, Sam Milby is sure he has found the girl to marry in former Miss Universe Catriona Gray, 26.

The actor, who is part of the Kapamilya Channel show, “Ang Sa Iyo Ay Akin,” said in a press con that he is ready to fight for Catriona if a rival comes along.

Before Catriona, Sam was in a relationship with Marie Jasmine and Anne Curtis. Meanwhile, Catriona was herself former linked to Kapuso actor, Clint Bondad.

Pokwang has two new shows lined up for her on TV5, both produced by Antonio Tuviera, who owns ATP Entertainment Productions.

The first is the talk show, “Chika Besh,” with Ria Atayde and Pauleen Luna-Sotto.

The second one is most likely a sitcom with Jose Manalo.

“ABS-CBN, in fairness, did not stop me when I told them my decision to accept the offers.

Obviously, they know I need to work because I have a family to support. As is common knowledge, I have a daughter with my current American partner (Lee O’ Brien), who is an actor, too, pero limited lang ang mga trabahong naibigay sa kanya.”

Pokwang is grateful that her firstborn, Ria Mae, is now working. Ria is a graduate of Culinary Arts. 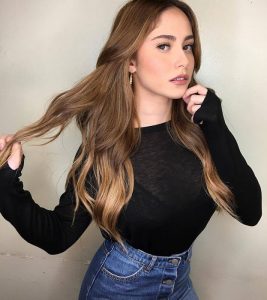 With her improved physique, Jessy Mendiola is all set to host TV5’s health and fitness show, “Fit For Life.”

She prepared for the show, according to Jessy. She worked with a trainer and also requested a nutritionist to advise her on how to eat healthy.

Boyfriend Luis Manzano, who is also into fitness, was a big help, too, and of course, an inspiration.

“Actually, everybody in the family likes him.”

However, Barbie revealed she felt hurt when Jak did not even greet her on her birthday.

In reality, Jak had planned a birthday surprise for her on July 31. He went to her house and had flowers and of course, a gift for his ladylove.

The lovebirds will soon be busy because Barbie will start taping the series, “Anak Ni Waray vs. Anak Ni Biday,” while Jak will have a new teleserye.

Barbie is also featured as Snow White in an episode of “Daig kayo ng Lola Ko.”

Happily in love, too, is host Robi Domingo, who just marked his second anniversary with Ateneo batchmate Maiqui Pineda.

Robi said he is pretty sure Maiqui is the one for him.

Robi, who dreamt to be a doctor as their family owns a hospital, also acts and plays the piano.

He was formerly with another Atenean, host Gretchen Ho. They were together for five years.

Guess who is the actor and actress who share the same birthday?

Aga appears not keen on celebrating his. He and wife Charlene Gonzales are with their twins Atasha and Andres in their beach house in Batangas.

Marian, on the other hand, thinks she will celebrate her birthday the way husband Dingdong Dantes marked his 40th last August 2. They just were at home with their two kids, Zia and Ziggy.

“I want to make the most of my time being with Dingdong and the kids. Soon, I know I will be busy,” said Marian.

With them in the series is Cassy Legaspi, twin sister of Mavy Legaspi. Cassy and Mavy are kids of Zoren Legaspi and Carmina Villaroel.

Fans, meanwhile, are wondering if Aga will have an entry in the 2020 Metro Manila Film Festival (MMFF). They know three producers are interested to have him star in their entries.

Aga’s MMFF entry last year, “Miracle in Cell No. 7,” was the festival’s top grosser. It was produced by Viva and directed by Nuel Naval.