JANINE Gutierrez has a new movie that is supposed to be showing now as part of the summer Metro film fest, but the festival was scrapped due to the lockdown and no one knows as to when it will be rescheduled. Janine’s movie is “Ngayon Kaya,” a romantic comedy with Paulo Avelino as her leading man (they both have the same manager, Leo Dominguez), directed by Prime Cruz, who did Maine Mendoza’s “Isa Pa with Feelings.” 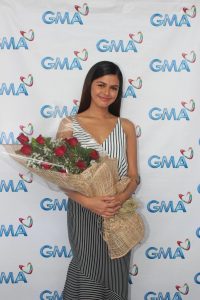 “Sayang nga, nabitin kami,” said the actress. “We’re just hoping it will be a blessing in disguise at mas maganda sana ang matapat na playdate for us later on.”

Janine actually has another new movie waiting for a wide theatrical release, this is the drama-thriller about woman empowerment, “Babae at Baril,” which had a limited run at the QCinema Film Festival where she bagged the best actress award.

While in lockdown, Janine is busy with her vlog on YouTube. She just posted the videos showing her experiences in the recent New York Fashion Week which she attended before the pandemic broke out. She shared with netizens her session with celebrity hair stylist Justine Marjan, who have styled many international celebrities, including Ariana Grande and Kim Kardashian. She also got to brush elbows with celebrity Vogue editor Anna Wintour.

To help our medical workers and other frontliners who risk their own lives to serve people during this worldwide health crisis, Janine has started her own fundraising initiative which she calls The Bright Side Project. She aims to buy Personal Productive Equipment (PPE) for health workers and also buy relief goods for indigent people in depressed areas. If you want to donate, go to gogetfunding.com/brightside. If you’re a lucky donor, you might win a pre-loved item from Janine herself.

Lilia Dizon is one of the brightest stars of LVN Pictures in the ‘50s. Her real name is Claire Strauss (her dad is of German ancestry) and she started her acting career at 16 right after WWII in 1946 in films where she portrayed the title role, like “Bathaluman” (where she played the statue of a goddess who springs to life), “Venus” (where she’s the goddess of beauty) and “Tucydides” (where she played a fairy living inside a balloon).

We saw those fantasy movies as a child and she’s just perfect for her title roles. In 1954, she won the best actress award in the Asian Film Festival held in Cambodia for “Kandelerong Pilak,” directed by Bert Avellana. We also saw her in the movie she did for Premiere Production, a costume action flick, “Sanda Wong,” which was filmed in color and shot in Hong Kong with Chinese actress Lola Young, directed by Gerardo de Leon in 1955.

She married LVN character actor Gil de Leon and they had three kids: Pinky, Christopher and Melissa, who all went into acting, with Christopher becoming one of the country’s top matinee idols and multi-award winning actors. Gil died of the big C and she later married Antonio Abad with whom she has two kids, Toni and Corazon.

She would later play mother roles and one of the best dramas she did is “Awit ng mga Dukha,” where she played the mom of LVN actresses Lourdes Medel and Mila Ocampo. She also played the domineering stage mother of a teenage Vilma Santos in the Tagalog Ilang-Ilang Productions drama, “Renee Rose.”

When her son Christopher was discovered by Lino Brocka in 1974, she played his mom in the award-winning “Tinimbang Ka Ngunit Kulang.”

She retired in the US in the ‘80s (where her daughter Pinky still resides) but she later returned to Manila and stayed with her son, Boyet.

Her daughter Toni is our friend in Facebook and we were so alarmed when we found out her mom is sick. We’re publishing here her open letter on FB, so that many people will pray for her fast and full healing. Let’s storm the heavens, praying for Miss Lilia Dizon, one of the brightest stars in the history of the local movie firmament ever. Here’s Toni’s very touching letter:

“It’s been about a month since the lockdown. I’ve never imagined that I will experience a pandemic in my lifetime. But the saddest thing I’ve been going through is to see my MOM deteriorate before my eyes. Mom has cancer. If this were a normal day, I would’ve rushed her to the hospital so she can be admitted. She was supposed to start her immunotherapy last March 15, but how can she?

“How can I send my 90-year-old mother when I know that people her age are prime targets of this disease? Sad to say that the safest place for her to be in is now the most dangerous.

“This virus has taken over our lives in a very demeaning and dehumanizing way. I’m extremely mad about how this all came about; I don’t want to elaborate on it right now. I cried my heart out for days to GOD because all we had here in the house is her oxygen machine and her maintenance meds but by God’s grace, I was able to find ACTIV Care through our good friend’s Angie Laborte and Dr. Mae Covera of Asian Hospital.

“They are Godsent. We were able to convert my mom’s room into a mini hospital with sufficient equipment for us to give her the most comfortable care and attention. Thanks to Dr. Rhea, Nurse John, and our two angel nurses who are tirelessly taking care of mom’s every need. TO GOD BE THE GLORY!”

ATMs roll out in 7-Eleven