The pandemic revealed just how important the simple things in life that we might have overlooked before – hugs, smiles, breathing, and communicating with loved ones. It also showed how invaluable entertainment is. The simple act of watching a favorite show or listening to a favorite tune can bring the family together. Even if solitary, entertainment can bring peace of mind, reduce stress, and provide respite from the worries of isolation.

Telecommunications company Smart Communications recognizes the incalculable benefits of connection and commits to providing more tools and choices for its subscribers. In introducing its latest endorser – South Korean heartthrob Hyun Bin, who made a splash as Captain Ri in “Crash Landing on You”—Jane Basas, Smart SVP and head for Consumer Wireless Business, understands that his value as celebrity goes beyond promoting their company’s latest offerings. 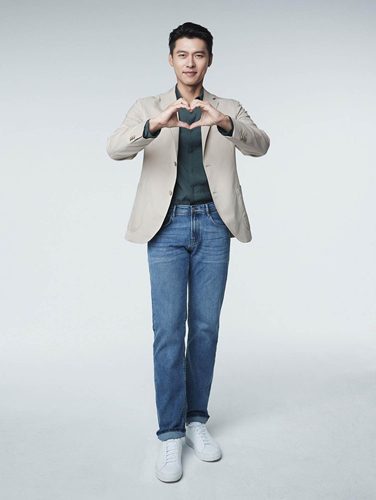 “It is a one-year engagement, so we have him with us for the next 12 months,” she related, “Obviously, because of confidentiality reasons, I cannot share the other terms of his contract, but I will say this: signing him up to talk about our message of the Smart GIGA Life and ‘Smart. Simple Ako,’ and the impact that he’s had in not just talking about the message effectively but in delighting and making our customers and subscribers happy during these trying times actually make him a very priceless investment.”

A fan of Hyun Bin, Basas has a unique perspective to just how right the actor is for their latest campaign.

“This was something that was quite exciting for us because we knew that there’s such a huge following particularly for the entertainment genre of K-Drama among Filipinos. I am a personal fan [of Hyun Bin]. ‘Crash Landing on You’ was actually the first K-Drama that I watched and I know my boss Mr. Al Panlilio was made to watch by his wife Angela, and MVP [Mr. Manny V. Pangilinan] is also a fan. So bringing Hyun Bin was natural for us because it would have been crazy for us not to do it,” she enthused.

“In fact, closer to Smart in terms of our service, our biggest service right now is called the Giga Video and people actually subscribe to the Giga Video to watch their K-Drama content. So, the feedback that we got in the past three days since we launched the campaign has been quite phenomenal and I think it’s a very good decision to bring Hyun Bin as part of the Smart family.”

Because of the coronavirus pandemic and the flight restrictions, the project was met with more than the usual complications. Much as the Smart executives would have wanted to be present at the shoot, which was done in Seoul with an all-Korean team, they had to contend with using technology to connect.

Smart President and CEO Alfredo S. Panlilio admitted his wife wanted to fly to South Korea as Jane’s assistant for the chance to come face-to-face with her idol. In a brief conference call, the CEO got to know firsthand what the hype was all about.

“We were able to have a short talk with Hyun Bin, less than three minutes. He seemed very nice, very down to earth. He [hardly spoke] in English but he said thank you and we thanked him for being the endorser of our product. Also, you can see how smart he is – no pun intended. The shoot was just one day but basically he learned Tagalog and said, ‘Mahal ko kayo, Smartees,’,” said Panlilio.

Smart – and simple, too, claimed Basas.

“I think he’s very simple. The original board was obviously written in English and he was supposed to be doing the full VO. The shoot was on a Tuesday. He asked for a copy of the script on a Saturday so he can practice. Imagine such a huge star wanting to practice!” she related.

“When he realized that he would have a difficult time voicing over the entire commercial end-to-end, we kind of negotiated with him to say certain lines on-cam. It was a very easy conversation; it was a breeze discussing with him what was to be said in front of the camera and what the professional VO [would do].

“After the shoot, we requested for some of his jackets to be sent back home to the Philippines and we didn’t expect him to send it with his signature so we actually have some souvenir items from Hyun Bin. Very nice guy.”

Lloyd Manaloto, Smart vice president for Corporate Marketing and Strategy, was also all praises for Hyun Bin and the team that handled the production of the commercial. The conditions were far from ideal, but thanks to technology and having the right people with the right attitude, the shoot was hitch free.

“The pre-production stage was actually quite difficult because we were conversing with the other team in another country. Having said that, working with Hyun Bin’s team and [Hyun Bin] himself was actually quite surprisingly simple and easy because I think they understood the challenges we were facing, that we were monitoring [remotely] and they were producing there. They also understood tight deadlines because we needed to do this quickly, we needed to release this in a specific time,” he related.

So when will Pinoys get to experience the “Hyun Bin phenomenon” up close and personal?

“He actually told us that he would’ve wanted to be here during the launch of the TVC, so we’re really praying that flight restrictions are lifted soon and that things go back to normal so we can make more people happy,” said Basas.

“When exactly? Like I said, we’re going to have to work it out, but when we do … we will certainly announce it and give you all the advance information when the time comes,” said Ramon Isberto, PLDT-Smart first vice president and Public Affairs head. (GFCT)