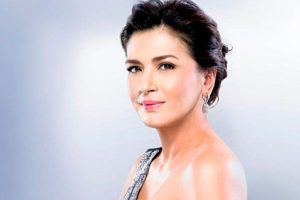 ZSA ZSA Padilla says she knows being cooped up at home can be stressful so, in her social media account, she gave some tips on how to take care of emotional and mental health while we’re all just staying at home.

She writes: “Are you sometimes overwhelmed with stress? Have you tried meditation? It’s rather simple. You start with focusing on your breath and clearing your mind. Try and do this in the morning upon waking up. All you need is 10 minutes a day and you will begin to feel the difference in a couple of days or weeks. I am no expert and just started this practice by accident when I was about to have kidney surgery 8 years ago. I noticed that it made me a calmer person.

“With all the stressful news going around these days during lockdown, I realized that I had to get back to it. Let’s make this a daily habit. Let’s not forget to take good care of our mental health, too. Love and light to everyone. I have attached a site for beginners in my IGStories. God bless us all.” 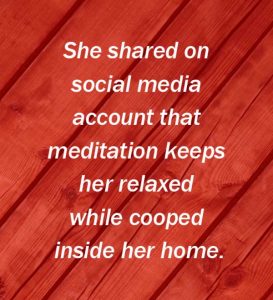 Zsa Zsa is also a member of the cast of an American TV series currently shot on location in Cebu in coordination with ABS-CBN.

This is “Amost Paradise” about a former Drug Enforcement Administration (DEA) agent who retires in Cebu and opens up a boutique shop there.

The lead character is played by Hollywood actor Christian Kane, who has appeared in movies like “Friday Night Lights,” “Just Married,” “Life or Something Like It” and “Tinker,” and in TV series like “Leverage,” “The Librarians,” “Angel” and “The Supernatural.”

“Almost Paradise” has Dean Devlin, of “Independence Day” and “Godzilla,” as executive producer and co-writer. It has ten one-hour episodes and local directors have been hired to helm some episodes, like Dan Villegas, Irene Villamor and Hannah Espia. The local actors who get to appear in all ten episodes are Nonie Buencamino, Art Acuña and Ces Quesada.

Zsa Zsa plays the role of a government official named Governor Rosales. They all auditioned for their respective roles. The show will be aired on WGN America.

Rochelle Pangilinan and hubby Arthur Solinap’s daughter, Shiloh Jane, turned one year old before the lockdown and they hosted a big Snow White-themed party for her.

You’d never suspect that Rochelle is now a mom since she is back to the formerly curvaceous figure she sported when she was still Sex Bomb’s star dancer. And while she’s staying at home during the corona lockdown, she shared her own brisk full-body workout for only five minutes.

Viewers can now follow her in her YouTube channel and they can do the cardio workout she does with dumbbells, right in the comfort of their own homes. The title of her YouTube channel is “The Solinaps” and she dances to the tune of the highly danceable upbeat SexBomb hit song, “Spaghetti.”

The feedback from the public is very positive. Many viewers say they are now doing the workout to keep themselves fit and they’re requesting Rochelle to come up with more routine workouts they can watch on YouTube and use as a guide.

You can still watch Rochelle in the replays of “Onanay,” where she plays the best friend of title-roler Jo Berry, Monday to Friday at 3:20 p.m.

Dingdong Dantes has completed a new movie that is meant to be shown this month as an official entry in the Summer Metro Manila Film Festival. But because of the corona lockdown, the festival has been postponed indefinitely and Dingdong doesn’t know yet as to when his movie, “A Hard Day,” will get to be shown.

“It’s an action-drama based on a hit Korean movie of the same title shown as entry in the Cannes film fest in 2014,” he said. “Siempre, we adapted the story to have a more Filipino flavor, as directed by Lawrence Fajardo, who did such acclaimed indie films as ‘Imbisibol’ and ‘Posas.’ I play a cop here at kasama ko sa cast sina John Arcilla, Janno Gibbs and Meg Imperial. Sana, mas magandang playdate ang maging kapalit ng original playdate namin, as I’m really proud of this movie na punong-puno ng thrills and suspense.”

Meantime, Dingdong continues to be active in fundraising projects that aims to help those badly affected by the coronavirus. He and his wife have prepared meals for medical frontliners and for the less unfortunate.

He happily reported: “As of today, we have been successful in sharing 3600 food and rice packs to families of daily minimum wage earners in Payatas, Smokey Mountain, District 5 of Quezon City, Maisan in Sampaloc Manila, Brgy. Longos in Malabon, Barangays 149 & 154 in Pasay City, Members of the Stunt Association of the Philippines, and to marginalized communities of the Dioceses of Novaliches, Cubao and Antipolo with Marikina. In addition, 150 rice packs will be provided to the Diocese of Malolos.”

For medical health workers, they have also distributed thousands of free meals. “We’ve delivered a total of 3,915 meals to our frontliners from our partner hospitals that include the Quezon City General Hospital, Dr. Jose Fabella Memorial Hospital and Jose Reyes Memorial Medical Center. May we always be blessed with the good will, the heart and the capacity to reach out to those who are in great need especially during this COVID-19 crisis.”

Wendell Ramos was directed by Gina Alajar in the hit drama, “Onanay.” He was then quickly given a follow up show in “Prima Donnas,” also a big hit, and the director is once again, Gina Alajar.

Now, that the show has temporarily stopped taping because of the corona lockdown, he spends most of his time with his family at home. What protective measures do they follow to ensure their safety?

“I make sure that me and my family, we all practice proper hygiene. We wash our hands thoroughly, use alcohol and face masks, and we just stay at home. If possible, no communication with people from the outside. No visitors allowed as of now. I also help in cleaning and sanitizing every part of our house, just to be sure.”

What’s your personal message to all frontliners?

“To our frontliners, I am truly grateful for your time, effort, love, dedication and patience. We feel the pain and worry of leaving your family for the sake of the people who need your services. No words can ever describe our gratitude to all of you. I pray that God will keep you all safe. We salute all of you!”

What’s the first thing you would do once COVID-19 goes away?

How is it acting with tween stars Jillian Ward, Sofia Pablo, Althea Ablan and Elijah Alejo? Do they ask acting advice from him?

“They’re all very easy to work with and very professional kahit bata pa sila. Serious sila sa craft nila. As their more senior co-actor, it is my duty to show these wonderful young actresses the most effective techniques and the best way to execute a role whenever they would ask for my advice. I am really proud of this Afternoon Prime show and to everybody who contributes their talent and dedication to make ‘Prima Donnas’ a consistent top-rater in its timeslot. Marami pa po kayong aabangan sa role ko as Jaime Claveria at sa painit na painit na love triangle at awayan namin nina Aiko Melendez as Kendra at Katrina Halili as Lilian. So, abangan nyo lang ang aming pagbabalik sa ere.”

IN NEXT BATTLE WITH MARKETS: Fed needs policy action more than...