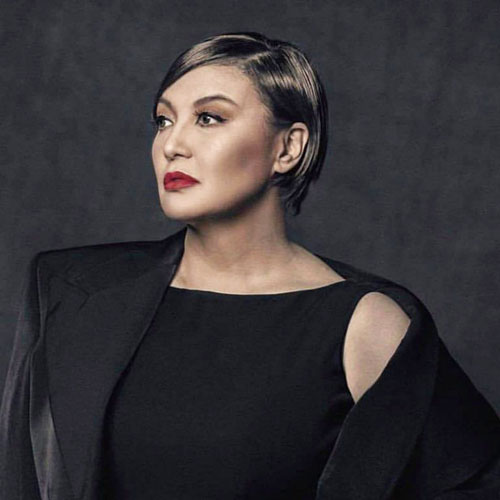 What is her role?

“I play Carmela. At 16 years old, naging ina agad siya, hindi naranasang magdalaga. Now, manang na manang siya. But she meets a new friend who takes her to a beach party and makes her experience everything that she has not experienced before. I can relate with her kasi I also got married at 18 and ang world ko noon was just shooting and doing my TV show.”

She’s happy that people notice her weight loss. “Now lang talaga nila napansin. They message me and tell me I inspire them. I’m already 55 and I’m happy that I can inspire other women to be healthy. I’m just glad to feel healthier now, so I can see my grandchildren and I can run with them. It’s also for health reasons and not just because you look good on screen. Gusto ko pang gumawa ng love stories like Meryl Streep when she did ‘It’s Complicated.’ Love stories should not be exclusive to young women but even with those who are in their 50s or 60s.”

How does Sen. Kiko Pangilinan feel now that she’s doing a movie that pushes the envelope when it comes to doing gross comedy?

Also in the cast of “Revirginized” are Rosanna Roces, Albert Martinez, Cristina Gonzalez and Marco Gumabao who will be Sharon’s younger leading man.

Julie Anne San Jose’s fans are happy that aside from “All Out Sundays,” she is now given another acting job in GMA News TV Channel 11’s new series, “Heartful Cafe.” Her last teleserye was “Guitar Princess” shown three years ago. She is given a new ka-love team, David Licauco.

GMA News TV is really beefing up its entertainment programming with youth-oriented shows like “Lost Recipe” and “My Fantastic Pag-ibig” with new love teams for the public to idolize. Those who have seen the trailer of “Heartful Cafe” say Julie and David have good on screen chemistry. What is Julie’s role in “Heartful Cafe”?

“I play Heart Fulgencio,” said Julie. “I’m a writer online. I do romance novels and I also have my own coffee shop business. I become a matchmaker for some of my customers, but the irony of it is, ako mismo, walang love life.”

She then meets Ace Nobleza (David), who will become her co-investor in her coffee shop.

Ace is an organized, goal-driven person while Julie Anne’s Heart is more free-wheeling, relaxed young woman so they don’t click with each other at first. How is it working with David?

“First time ko to work with him so I’m excited,” she said. “We see each other around GMA Studios, but we never really got the chance to talk or magkamustahan. Dito sa show, mas nakilala ko si David. I hope the viewers will support our love team as we’re doing our best and everything to offer something new to those who’d watch ‘Heartful Cafe.’”
How about David? How is it working with Julie Anne?

“She’s very nice, on and off camera,” David replied. “As we all know maganda naman talaga si Julie and she’s very talented. But what amazes me is that her mood on the set at 8 in the morning is not at all different from her mood up to the last scene we’d shoot at night.”

Barbie Forteza is ecstatic over the high ratings that “Anak ni Waray vs. Anak ni Biday” is currently getting. It’s just too bad the show is ending this Friday. Even if fans request that it gets extended, such things are difficult these days because of the pandemic, unlike during the olden days when it’s easier to extend a hit show.

“Anak ni Waray” has really gotten more intriguing as it now appears that Barbie and Kate Valdez were switched at birth and they grew up with different mothers.

Barbie is really so fortunate as both her career and her love life are doing well. She considers boyfriend Jak Roberto as a lucky charm who brought so many blessings to her life and career.

But Barbie will not really be idle even if “Anak ni Waray” ends as she’s now a host and also performs in “All Out Sundays” and she will also star in a new episode of the hit Kapuso primetime drama anthology, “I Can See You,” where she will be paired with Paul Salas.

Nora Aunor as Cedes is reunited with her daughter Nollie (Mylene Dizon) and granddaughter Maggie (Kyline Alcantara) as their hit afternoon drama, “Bilangin ang Bituin sa Langit,” nears its shattering climax. Things have gotten so intriguing now that Kyline has found out that Zoren Legaspi as Anselmo is really her biological dad.

Ate Guy is really so busy these days as she has now started shooting a new film with director Adolf Alix, “Kontrabida,” where she will play a villain role, supported by top stars like Jaclyn Jose and Rosanna Roces.

Here’s hoping this will be shown in actual theaters and will not suffer the same fate of her last movie, “Isa Pang Bahaghari,” which didn’t do well when it was just shown online in the last Metro filmfest.

Here’s also praying that this year will be a good one for Ate Guy. Last year, typhoons Rolly and Ulysses wrecked her ricefield in her native Iriga in Bicol so she wasn’t able to harvest anything.

Lifting of ban on new projects one less hurdle to mining...