Leading the list of winners is GMA’s flagship newscast “24 Oras,” which was recognized as the Popular TV Program in the News & Public Affairs category.

Alden Richards was hailed as Phenomenal Star of Philippine Cinema and Film Actor of the Year for the blockbuster movie “Hello, Love, Goodbye.”

The well-loved pair of Bianca Umali and Miguel Tanfelix received the Most Popular Loveteam for Television award for their outstanding performances in the drama series “Sahaya.” 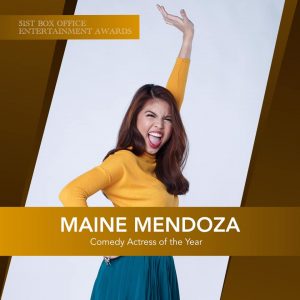 The mainstays of “Eat Bulaga” also took home various awards. Allan K received the Bert Marcelo Lifetime Achievement Award while Jose Manalo, Wally Bayola, and Paolo Ballesteros won as the Male TV Host of the Year. Paolo also earned the Comedy Actor of the Year award, while Maine Mendoza was chosen as the Comedy Actress of the Year.

Receiving the Box Office Entertainment Awards nod as well was fast-rising singer Anthony Rosaldo, who was named as the Promising Male Recording Artist of the Year.