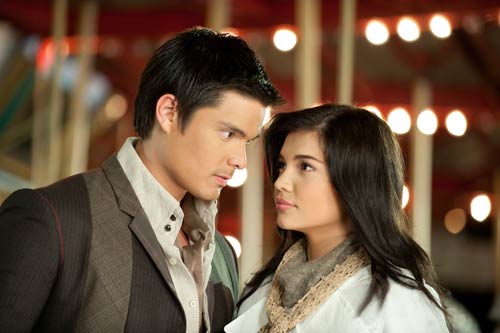 GMA brings back the beloved Philippine adaptation of the hit Koreanovela “Stairway to Heaven” on its afternoon block.

Leading the afternoon line-up is “Ika-6 Na Utos” starring Sunshine Dizon as Emma, Ryza Cenon as Georgia and Gabby Concepcion as Jerome at 2:30pm. The soap dwells on the tribulations of Emma, the rightful wife, and her vengeance against her husband Rome and his mistress Georgia.

Replacing “Onanay” is the unforgettable remake of the classic Korean drama “Stairway to Heaven” featuring Dingdong Dantes and Rhian Ramos at 3:25 p.m. Initially aired in 2009, the well-received Pinoy adaptation follows the story of star-crossed lovers Cholo (Dingdong) and Jodi (Rhian) who are inseparable childhood friends with a special bond that blossoms into love. Just when their love story is about to unfold, tragedy strikes the two. Completing the star-studded cast are TJ Trinidad, Glaiza De Casto, Jean Garcia, Jestoni Alarcon, and Sandy Andolong. Barbie Forteza and Joshua Dionisio also portrayed the young Jodi and young Cholo, respectively.

This will be followed by the heart-warming Korean series, “Strong Girl Bong Soon” at 4:15 p.m. It tells the story of a girl born with superhuman strength whose charming personality entices Kenny (Ji Soo) and Mikael Ahn (Park Hyung-sik) who will fight for her love and attention. Bong Soon’s dream is to create a video game with herself as the main character. When the CEO of a gaming company, Mikael Ahn, witnesses Bong Soon’s extraordinary strength, he hires her as his personal bodyguard.

Next is the country’s top-rating variety program “Wowowin” which airs simultaneously online through its official social media pages and on television at 5 p.m. As it celebrates its 5th anniversary, “Wowowin” treats its viewers with more spectacular prizes aside from bringing joy and hope to Filipinos amidst the COVID-19 crisis. Well-loved Kapuso TV host Willie Revillame will give away these prizes through the segment “Tutok To Win,” wherein Willie calls a lucky viewer to win cash prizes if they answer his questions right.