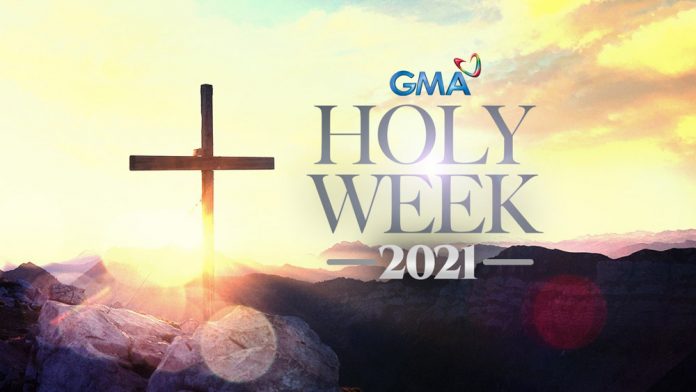 Docudrama “Jesus: His Life” opens Maundy Thursday at 6:00am with the stories of Mary, Joseph, and John the Baptist.

CBN Asia is set to offer its Holy Week specials at 10 a.m.

Afterwards, catch the heartwarming family movie “The Stray” at 11 a.m.

Lunch and laughter will be served with the back-to-back replay of two episodes of “Daig Kayo ng Lola Ko” titled “Boggs, The Easter Bunny Mischief” and “Annie, The Runaway Bride Princess” starting at 12 p.m.

The Hollywood classic featuring the retelling of the Biblical story of Moses in “The Ten Commandments” airs at 1:30 p.m.

Then, tune in to “24 Oras” at 6:30 p.m. This will be followed by a marathon of the mini-series “Love on the Balcony,” top billed by Alden Richards and Jasmine Curtis-Smith, from the first season of the drama anthology “I Can See You” at 7:15 p.m.

Cap off the night with the replay of #MPK’s “Ang Kriminal na Binuhay ng Diyos” starring Dingdong Dantes at 10:30 p.m.

Welcome Good Friday (April 2) with the internationally-acclaimed religious program “Power to Unite,” hosted by Elvira Yap-Go at 6 a.m. Then, “Jesus: His Life” airs at 7 a.m. featuring the story of Caiaphas and the story of Judas.

Watch “The Story of Jesus for Children,” a family drama following His life as seen through the eyes of children at 7:30 a.m.

Kids can look forward to adventure and comedy on “Ice Age: Collision Course” at 8:30 a.m.

The whole family can tune in next to the inspirational movie “Life with Dog” at 11 a.m.

Recall Jesus’ seven last words from the Dominican Province via “Siete Palabras” which starts at 12 noon. Then, spend the rest of the afternoon with the film “Gladiator” at 3 p.m.

“Tunay na Buhay” presents the life story of “Mars Pa More” host Iya Villania at 5 p.m. This will be followed by the “I-Witness” documentary of Howie Severino “Ibang Pagtingin” at 5:30 p.m.

Catch Bianca Umali as she takes on the role of an inspiring teen-amputee with the replay of #MPK “Sayaw ng Buhay: The Lairca Nicdao Story” at 10:30 p.m.

Meanwhile, fall in love with back-to-back romance movies “Cara x Jagger” starring Ruru Madrid and Jasmine Curtis-Smith at 12 noon and “Because I Love You” with David Licauco and Shaira Diaz at 1:30 p.m. Then, the epic historical drama movie “Ben-hur” airs at 3 p.m.

Let us all pause and spend a fruitful Holy Week with our loved ones from the comfort of our homes with GMA’s Holy Week specials from April 1-3.