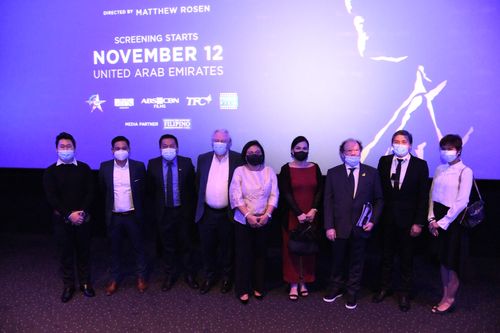 DUBAI, UAE — “Quezon’s Game,” which tells of the story how Jewish people were rescued by Philippine President Manuel L. Quezon, premiered last November 9 at the Mall of Emirates in Dubai, UAE, which happened to coincide with a historic event to the Jews known as the Kristallnacht or the Night of Broken Glass.

According to the Holocaust Encyclopedia, the Kristallnacht or the Night of Broken Glass happened in 1938 in Germany where many synagogues were burned, thousands of Jewish businesses were destroyed, and many Jewish lives were lost.

Thus, watching the film “Quezon’s Game,” which tells the story of how Philippine President Manuel L. Quezon and some notable figures in the 1930s have rescued refugees from the ghettos of Germany and Austria, was a moving experience especially to those who have Jewish roots.

“This movie is very important for everyone to watch and to see what the Filipino community has done for the Jewish people many years ago. This movie is not about to learn what happened some 80 years ago, but what we ask is what will happen tomorrow? What could we do to make a change, to make a better tomorrow?” said Rabbi Levi Duchman who were among those who graced the well-attended “Quezon’s Game” premiere.

On the other hand, as ABS-CBN and TFC bring the movie to UAE, ABS-CBN Global Managing Director to Europe, Middle East, and Africa Joseph Arnie Garcia says it is an honor to take part in sharing the story of the heroic act of Manuel L. Quezon to the world. “While we commemorate our brothers and sisters who suffered at that time, the same event also brought about the good in humanity. One of whom who inspired us and opened his home to us is the Philippine President Manuel L. Quezon. This is his story. On behalf of ABS-CBN and The Filipino Channel, it is an honor to witness and to share with everyone the untold story of his heroism and those who fought beside him,” he said.

Philippine Ambassador to the UAE Hjayceelyn Aurora Quintana who is among those who graced the special screening also agrees that the screening of the film the region is timely, saying, “I am glad that the producers of Quezon’s Game have brought this movie to the UAE—a country that is blazing its own trail for greater tolerance and humanity.”

The film resonated even to the younger generation, like to the Filipino Jewish Talia Conway who was born and raised overseas. “As a mixed child, you don’t usually see both your cultures in a big screen very often and it is very interesting for me to see both sides of the story because I usually hear about the holocaust, what happened to my family, my descendants, but I don’t usually hear about the Philippines and their help. This is really interesting. I’ve never heard this before and it is very important to my culture to know because I’m half Filipino,” she said.

The UAE release of the film “Quezon’s Game” also underscores the unprecedented close relations between UAE and the Jewish country, Israel, after the Abraham Accord was signed last August. The UAE high-ranking officials, including H.E. Sheikh Maktoum Bin Butti Al Maktoum, the Head of the Ministry of Foreign Affairs and International Cooperation (MOFAIC) Office in Dubai, even graced the movie premiere.

It is directed by Matthew Rosen, written by Janice Y. Perez and Dean Rosen which was based on the original story of Matthew Rosen and Lorena H. Rosen, under the Supervising Producer Marizel S. Martinez and Creative Producers Enrico C. Santos and John Paul E. Abellera. The film’s Executive Producers were Carlo L. Katigbak, Olivia M. Lamasan, Linggit Tan-Marasigan, and Lorena H. Rosen.