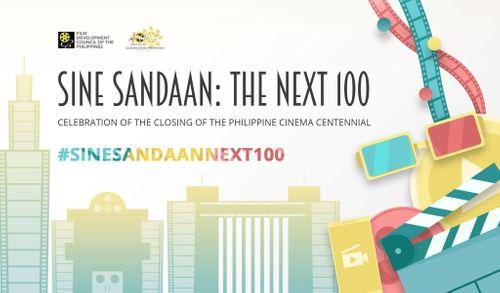 With the many changes faced by the country and the rest of the world this year, the Film Development Council of the Philippines (FDCP) has been continuing its efforts in supporting, promoting, and empowering the local film industry. In the last few months, this support has come in the form of the DEAR assistance program for displaced workers during the pandemic, online film festival support, regional film schools, and more.

The Film Development Council of the Philippines (FDCP) is wrapping up the celebration of “Sine Sandaan,” the year-long celebration of the Centennial of Philippine Cinema that kicked off in September last year.

FDCP Chairperson and CEO Liza Diño spoke about the events in store for this milestone celebration, “September marks the official closing of the 100 years of Philippine cinema. Despite the pandemic, the FDCP wanted to ensure that our efforts will meaningfully honor this once-in-lifetime event through various events, activities and programs all year round. And as we close Sandaan, we open our ‘NEXT 100’  by launching several initiatives as we look forward to a better, more sustainable and progressive hundred years.”

FDCP has scheduled an array of events this month that aims to celebrate, support, and advance the growth of Philippine cinema for the “Sine Sandaan: The Next 100.”

“These initiatives truly represent how we foresee the future of the Philippine film industry and how we as an Agency can support it to reach greater heights. The future of Philippine Cinema is to realize the ambition of continuously elevating the level of filmmaking in the country and be globally competitive. It’s about empowering the stakeholders to diversify and enrich not just through our narratives and stories but in our representation in the international film community and industry.

“As for this month’s conduct of activities, this is all about collaboration. Right now, many sectors in industry and our larger community are still facing difficulties in light of the global pandemic, we wish for Sine Sandaan: The Next 100 to be a platform to partner and support stakeholders and organizations and engage them as professionals. Especially on September 30 at our closing event, we will make this a holistic celebration by giving work and financial support to the workers of the Philippine film industry as they recover from the damaging impacts of the COVID-19 pandemic while also still making the best of what we have as a community,” Diño added.

The month-long celebration kicked off with a virtual event that officially opened the Film Industry Conference 2020 Online and Full Circle Lab Philippines. A mini-concert by Ice Seguerra concluded the event.

The Malaysia Digital Economy Corporation (MDEC) also held its annual conference and exhibition for promoting innovation and creativity in the animation and visual effects industry in Southeast Asia this year from September 7 to 10.

This year’s edition of the Kre8tif conference took place online, under the banner Kre8tif! 2020 Virtual Conference. It sought to address the changing landscape in Southeast Asia due to the COVID-19 pandemic, and continued supporting the creative industries in the region. The conference featured insightful talks, panel discussions, and workshops led by leaders in the animation industry.

FDCP is also holding the online edition of the Film Industry Conference (FIC) this month from September 11 to 15. Launched in 2017, the Film Industry Conference brings together various international film industry experts and stakeholders to discuss the latest trends, opportunities, platforms, and cooperation that Filipino producers and filmmakers can explore for the development, production, and distribution of their projects with the intent of crossing over beyond local borders.

This latest edition of the conference, dubbed FIC Online 2020, features eight public sessions free and accessible to the public. These Zoom sessions is streamed for free on the FDCP Facebook page and YouTube channel. In addition to these public sessions, the conference also features six Masterclasses for film industry professionals and enthusiasts. Both public sessions and masterclasses are led by international speakers and mentors who are leading experts in their fields.

Initially scheduled for April and postponed due to the coronavirus pandemic, the expanded edition of Full Circle Lab Philippines will take place in September, from September 15 to 30 through an online platform. The international film development program is a collaboration between FDCP and Tatino Films.

In total, Full Circle Lab Philippines will support 20 projects across four different film labs. Under the Fiction lab, eight projects under the fiction category and in the development stage will receive mentorship from Full Circle Lab mentors. Meanwhile, there will be four projects each under the series and animation category for projects in development. Full Circle Lab Philippines will also include the “First Cut” editing lab, for feature-length films in the editing stage. “First Cut” will be supporting four films. The labs will be led by various international film industry experts led by Matthieu Daras and Izabela Igel as the head mentors.

There will be a “Sine Sandaan on The Manila Times TV” running alongside the centennial year celebration of Philippine cinema and will launch on September 18. For a thirteen-week span, film lovers can watch contemporary Filipino filmmakers under the program’s “Spotlight” section, as well as renowned Filipino auteurs under the “Masters” section. Films in the “spotlight” section will be shown free and accessible to the public, while films in the “masters” section will be available for a price.

In partnership with the PIA Region XI, FDCP will be hosting a documentary production workshop scheduled to train between 30-40 aspiring filmmakers from the five provinces of the Davao region.

Through the workshop, they will be trained in documentary-filmmaking with a focus towards documentaries about Ending Local Communist Armed Conflict (ELCAC) related success stories.

The various topics from the workshop include: Story development and story treatment writing, Basic cinematography and camera handling, and styles of editing.

The Lutas Negros Oriental Film Festival provides is a film festival that provides a platform for the region’s films and filmmakers. The festival aims to show the unique and diverse stories of the region, both showcasing the local filmmakers’ works and widening their knowledge about filmmaking.

This year will be the 7th installment of the festival and is scheduled for September 17 to 19. The festival is presented by Foundation University, FDCP, and the National Commission for Culture and the Arts.

In partnership with FDCP, KOMIKET, an NGO created by komiks creators and volunteers will be hosting the first-ever Philippine International Comics Online Festival (PICOF). The festival aims to launch new comics, discover new creators, and connect with new readers. PICOF envisions establishing the Philippines as a hub of skilled storytellers, and to grow the relationship of film and komiks.

There will also be the “FilmPhilippines WIFI: Workshops in Film Incentives” on September 24.

Workshops in Film Incentives (WIFI) is a live, in-depth instructional and discussion open to film and audiovisual sector professionals. The event discusses the guidelines, mechanics, and timetables needed to know in availing the FilmPhilippines Incentives: the Film Location Incentive Program (FLIP) and the International Co-Production Fund (ICOF).

Both incentive programs support international productions and co-productions featuring Filipino producers that film and produce their projects in the Philippines. The program is recommended for industry professionals who wish to know more and avail of the incentive programs.

The Mowelfund Film Institute (MFI) will be launching the Special Masterclass Series online this September in collaboration with FDCP. The masterclass series will cover four film elements: Cinematography, Scriptwriting, Directing, and Acting.

The cinematography masterclass, scheduled this month on September 26, will be given by veteran filmmaker Raymond Red.

Amid the pandemic, the PFA safeguards 26,171 film elements by deploying a skeletal workforce to ensure the daily equipment maintenance of archival audiovisual materials. It has the Film Restoration Program, digitization program, and intellectual property rights protection initiative.

The PFA website (www.philippinefilmarchive.ph), which will be launched on September 28, will have the PFA Film Catalogue for the PFA’s film collections and their corresponding metadata. The PFA also intends to develop the Philippine Film Catalogue for all Filipino-produced films.

Meanwhile, the PFA Collection has a database of non-film assets (print and non-print materials). It can provide information for students, researchers, and film enthusiasts who want to learn about filmmaking technologies of the past.

There will also be a Media Library containing the PFA films that are accessible for public viewing within the facilities of the FDCP, and a Services section with resources for AV materials and film preservation services that the PFA is offering to the public for the first time.

The FDCP National Registry (NR), created by FDCP as a database of all active film and television workers, audio-visual companies, audio-visual organizations, and film festivals all over the country will be launching its smartphone application on September 28. Through such a database, the FDCP is able to support and empower the film industry, furthering possible collaboration, giving voice to the workers, and providing active participation and other necessities for the industry.

Most recently, the NR served to support the implementation of the Disaster/Emergency Assistance and Relief (DEAR) Program that provided direct cash assistance to audiovisual workers and entertainment press displaced by the COVID-19 pandemic. Through the NR app, audiovisual workers may register to the database and join the National Registry as a member. They will also be able to directly contact the NR for other concerns. With the NR app, FDCP aims to broaden the reach of the national registry as the national film industry continues its recovery and response to the global COVID-19 pandemic.

Winners for the #SineWikainChallenge will be announced later this month on September 29.

FDCP launched the online #SineWikainChallenge in August celebrating the “Buwan ng Wika” and has opened up submissions for the social media challenge. Submissions are open till September 20. Under #SineWikainChallenge, participants will creatively interpret various salawikains into brief vertical short films to be posted on social media. The various salawikain tackle a broad number of topics about life, love, family, friendship, and character development, and was partly inspired by the Good Moral and Right Conduct (GMRC) Law, which institutionalized GMRC and Character Development as part of the K-12 curriculum.

Participants of the #SineWikainChallenge will have the chance to win cash prizes, with a maximum of PHP 15,000 for the 1st place winners in both adult and youth categories, PHP 10,000 for the 2nd place winners, and PHP 5,000 for third place. In addition, FDCP will select 20 participants in each category to receive PHP 2,000. The winners will be announced on September 29, through FDCP’s Facebook and Twitter pages as well as on the Pista ng Pelikulang Pilipino and Sine Sandaan pages.

To officially close the Philippine Cinema Centennial, FDCP will host and stream this two-hour virtual event that encapsulates our aspirations for the future of Philippine Cinema. The culminating activity will feature performances from a powerhouse of top artists, including Lani Misalucha, Gary V, Martin Nievera, Lea Salonga, The Company, Acapelago, and Robert and Isay Alvarez.

The march of mavens