‘This is the actor-director’s way of helping those who are now having a hard time making ends meet.’

Former “Sunday PinaSaya” host and actor Joey Paras is asking for financial help. He is currently confined at St. Luke’s in Taguig and has to undergo angioplasty, which costs almost a million pesos.

For his previous heart surgeries, his co-workers in “Sunday PinaSaya” helped him raise funds.

The hit drama series “Pamilya Ko” will be discontinued, just like Liza Soberano and Enrique Gil’s primetime series, “Make It With You.”

“Magaling ang aming director (Raymond Ocampo). This is my first time to work with him, and some members of the cast.

Now that “FPJ’s Ang Probinsyano” is on air again, the cast, led by actor-director Coco Martin, is back to work, too.

Romnick, we heard, is in love with model Barbara Ruaro, who has appeared in a few movies before.

She and Romnick are often spotted together.

Although Romnick and former wife, Harlene Bautista, have yet to make their separation legal, the ex-couple have not made secret their current romance.

Harlene is happily in love, too. She is dating businessman Neil Eugenio.

Romnick and Harlene’s children are now grown-up. Before their marriage, Harlene had a child with director Rico Gutierrez.

It seems like reconciliation is no longer in the cards for John Lloyd Cruz and Ellen Adarna.

John Lloyd was in Cebu for a long time to be with Ellen and their son. Recently, he was seen applying for a pass so he could leave Cebu.

Reports have it that John Lloyd has been extending help to those affected by the coronavirus pandemic. The actor is known for having a soft spot, especially for kids and frontliners.

“Hindi kaya balak ni John Lloyd to eventually turn politician in Cebu?” someone asked.
Well, the next election is two years away.

Judy Ann Santos has expressed her desire to team up with Piolo Pascual in a movie. Their last movie was the romance-drama, “Don’t Give Up On Us” (2006) under Star Cinema.

The actress was still single then. She tied the knot with Ryan Agoncillo in 2009.

Judy Ann is currently hosting a show, “Paano Kita Mapapasalamatan,” which airs every Saturday on the Kapamilya Channel on cable.

She was last seen in “Starla,” with Joel Torre, Janna Agoncillo and Tirso Cruz III.

Speaking of Tirso, or Pip as he is fondly called, the actor was given a haircut by his wife, Lyn Ynchausti.

“At the time kasi na gusto kong magpagupit, wala pang barberyang bukas. Lyn volunteered to cut my hair,” he said, “And, so far, gusto ko pagkakagupit niya. Viewers of the series, ‘FPJ’s Ang Probinsyano,’ will see my new hair, which I find cute.”

Their children, Bodie and Djanin, are now grown up. Bodie is a pastor, and Djanin is an actress and also bakes cinnamon rolls and bread. 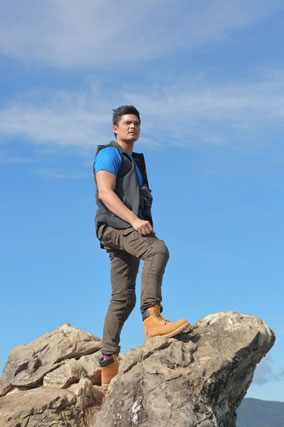 Dingdong Dantes has launched his delivery app, Ding Dong Delivery Service, where he intends to employ entertainment workers who have lost their jobs. This is the actor-director’s way of helping those who are now having a hard time making ends meet.

Right now, he is a fulfilled family man. He and wife, Marian Rivera, are on the peaks of their career. They are in-demand actors and endorsers. The couple have two beautiful kids, Zia and Ziggy.

Meanwhile, Marian, who has a series with Gabby Concepcion lined up, is busy with her bustling flower business.