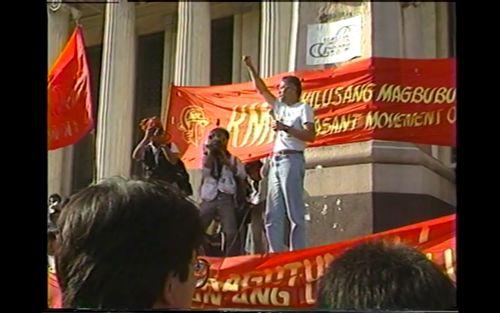 When all the world is seeking to reflect on the lessons emerging from the pandemic, a group of filmmakers is sounding out the call to resist the lethal lure of forgetfulness.

Daang Dokyu, a festival showcasing a selection of documentary films, sends out a bellow through its line-up of opening films under the theme: “Martial Law, Never Again.”

Slated from September 19 to 21, Daang Dokyu’s opening salvo will feature ABS-CBN’s documentary entitled “Marcos: A Malignant Spirit” and Ramona Diaz’ “Imelda.” It will also premier Kiri Dalena’s “Alunsina” and Nettie Wild’s “A Rustling of Leaves: Inside the Philippine Revolution.” Completing the line-up is Lito Tiongson’s “Mendiola Massacre.” All films will be streamed online.

According to Jewel Maranan, one of the festival directors, “The opening program is not just a lineup of films to remember the past but a statement for us in the present. Our generation now has been witnessing the erosion of our freedoms, unbelievable abuses of power, and a growing confusion about the future. We think documentaries can help make up our minds about the lessons already learned, mistakes we shouldn’t repeat, and what we shouldn’t allow again to be done to us as a people. We are offering these films for free, the largest collection of curated Philippine documentaries ever put together for online public viewing, films from 1914 to 2020. We’re inviting everyone to revisit this album of images because these are about us.”

“Marcos: A Malignant Spirit,” hosted by Angelo Castro Jr., is a rarely seen film even by those who have been studying Marcos archives. It contains rare footage and recorded conversations.

This 1986 film is about the plunder of a nation and it looks into the inhuman manner in which Marcos and his henchmen systematically drained the economy in their greedy and unrelenting quest for fortune.

“Imelda” is a 2003 documentary film about the life of Imelda Marcos. The film documents her childhood, marriage to Ferdinand Marcos, her role in the dictatorship, her family’s exile in Hawaii, and their eventual return to the Philippines.

It won the Excellence in Cinematography Documentary Award at the 2004 Sundance Film Festival.

“Alunsina” documents the struggle of children and families in an urban settlement severely affected by the government’s war against drugs – an ideology that has led to thousands of extrajudicial killings of suspected drug users and has left hundreds of children without parents.

According to Dalena, the film aims to focus on the plight of children and the remaining family members and emphasizes their bravery in these difficult conditions. It offers an intimate way of telling how they confront and survive these tragedies.

“A Rustling of Leaves: Inside the Philippine Revolution” examines the left-wing revolution of the Philippines and chronicles the three points of a political triangle — the legal left, the illegal (armed) revolution, and the enemy which threatens them both: the armed reactionary right.

Canadian documentary filmmaker “Wild,” filmed in 1988, has never been shown in the Philippines and will be making its debut here after 32 years.

The film had its world premiere at the Berlin International Film Festival (Film Forum) in 1989 where it won the People’s Choice Award. It also won the top Prix du Public award at the 50th anniversary of the National Film Board of Canada; Grand Prize at the Houston Film Festival; and Best Cinematography from the Society of Canadian Cinematographers

“Mendiola Massacre,” filmed in 1987, is a newsreel of the massacre in Mendiola Bridge on January 22, 1987.The protest action for genuine agrarian reform by peasant organizations led by Kilusang Magbubukid ng Pilipinas (KMP) resulted in the deaths of thirteen farmers and injuries of hundreds of civilians.

A discussion on the theme “Martial Law, Never Again’ will complete the opening activities. This will be moderated by Ed Lingao.

The festival will also present documentaries tackling issues on the country’s environment, taboos, history, different regions, and its future from October 2 to November 5, 2020.

Included in the line-up are some of the best documentaries aired on television recommended by festival partners and the leading news and journalism organizations in the country, which are GMA Network, ABS-CBN, Probe Productions, Rappler, Philippine Center for Investigative Journalism (PCIJ) and the National Commission for Culture and the Arts (NCCA).

Aside from the film screenings, the film festival will continue to bring the most relevant debates on these current issues through its “Reality Check” sessions, all offering the “docu way” to take stock of how we have been as a nation and where we are headed. Master classes will also be offered with industry gurus helming.

To be launched is a book on the genre. The “Dok Book” is a collection and recollection of histories and stories, as well as views and interviews, centered on the rich landscape of the Philippine documentary in film and television.

It includes details and historical accounts from the arrival of cinema in the late 1890s to the shutdown of the press during Martial Law as well as the advent of digital technology in the 2000s. The book contains contributions from scholars and practitioners in the field including Nick Deocampo, Teddy Co, Adjani Arumpac, Patrick Campos, Ed Lingao, Howie Severino, Kara David, Kidlat Tahimik, Kiri Dalena, Sari Dalena, Gutierrez Mangansakan II, and many more Filipino documentarists.

Daang Dokyu, the first documentary festival of its kind showcasing the largest collection of Philippine documentaries from the past one hundred years, is initiated by the Filipino Documentary Society (FilDocs), founded by documentary filmmakers Jewel Maranan, Kara Magsanoc-Alikpala, Baby Ruth Villarama, and Coreen Jimenez.

The festival is made possible with the support and partnership of the Office of House Deputy Speaker Loren Legarda, National Commission for Culture and the Arts, UP Film Institute and Probe Media Foundation.

Deputy Speaker Legarda states “It’s about time the documentary is given the spotlight. No other platform can give the viewer a near total experience of an issue or a cause in a deeper, more immersive manner. The documentary can spark dialogue, movements, provoke change. Catch all these impactful, exquisitely produced documentaries on Daang Dokyu, a festival of Philippine Documentaries.”

More information is available at daangdokyu.ph.