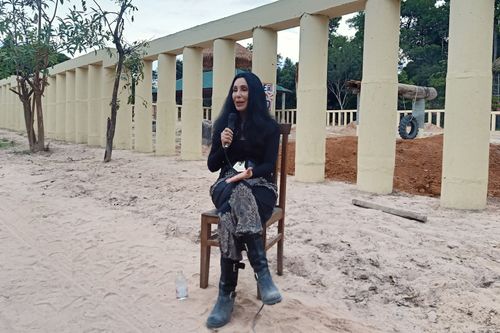 ODDAR MEANCHEY PROVINCE, Cambodia – Pakistan’s lonely elephant Kaavan began his new life in a Cambodian wildlife sanctuary on Tuesday, the result of years of campaigning for his relocation by U.S. singer Cher.

She was there to see him beginning to explore his new home and said: “You know this is amazing for him… his life is going to be the life of an elephant and not the life of a prisoner.”

The 36-year-old elephant had spent most of his life at a zoo in Islamabad, before being moved on Tuesday to the Kulen Prum Tep Wildlife Sanctuary in Oddar Meanchey Province, to start a new life with some 600 other elephants.

Now in Cambodia, Kaavan will gradually move from a quarantine enclosure, to a larger one, and then will eventually be able to explore an area spanning several hectares, according to a communications representative from the animal welfare organization Four Paws.

“It’s just a lovely place and the people are very kind. I would love in some years to come back and see him,” added the singer.