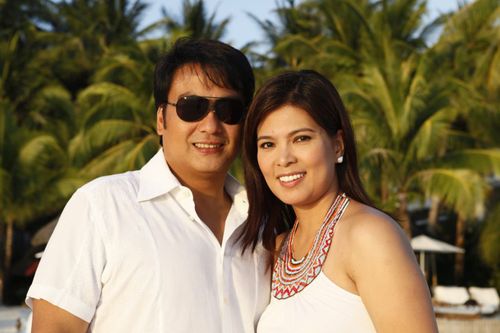 At a recent interview, the couple talked about their personal and professional trials, such as health scares and the loss of their patriarch, Sen. Ramon Revilla, Sr.

“2020 was a test of resilience for all of us. We had our trials. Nagka COVID si Sen. Bong, nawala ang aming mahal na ama, si Ramon Revilla Sr. Even in our family, my daughter who lives in Davao and her family also experienced COVID, buong household,” said Mayor Lani.

He also admitted to being emotional about the Christmas engagement of their daughter Gianna to boyfriend of nine years, Jed Patricio.

Mayor Lani said the couple have decided to have a toned down outdoor wedding because of the pandemic.

The couple have teamed up in the online game show, “Kap’s Amazing Gadget Giveaway.” Sen. Bong is so effective as host that he is being teased as a contender to the throne of “Wowowin’s” Willie Revillame. He demurred though, saying that he is just focused on giving happiness to the audiences, nevermind bashers who continue to hound him.

He is thankful to GMA for paving his return to the small screen via the action-fantasy series “Agimat ng Aguila” under director Rico Gutierrez. Revilla is proud of the story, cast and production and said it was shot as a film and can even be re-edited to be shown as a possible entry to the next Metro Manila Film Festival.

Senator Bong was open to a possible collaboration with Star Cinema, and even expressed his support for ABS-CBN, the mother company of Star Cinema, to have a franchise.