While live concerts were put to a stop by the pandemic, that didn’t hinder international K-Pop group Blackpink from entertaining Blinks worldwide. The music powerhouse launched its first-ever livestream concert titled “The Show,” on January 31, sponsored by Globe. 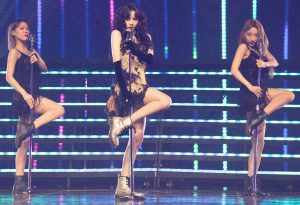 Blinks were able to get a reinvented concert experience featuring Jennie, Jisoo, Lisa, and Rose at their best.

The livestream concert is part of Globe and Blackpink’s partnership under the telco’s newest campaign, Reinvent Your World, which empowers its customers to transform themselves in the digital world and open up to new and exciting possibilities, like “The Show” for example, with Globe as their partner.

Kicking off the show with their 2019 hit “Kill This Love,” Blackpink gave a glimpse of what their world tour could have been if the pandemic was out of the picture. Complete with 10 different sets, spectacular and never-before-seen choreography, flashy costumes, and a full-on live ensemble, every Blink watching at home surely felt like they were in the same venue as their idols.

Blackpink performed their hit songs “Whistle,” “Boombayah,” “Don’t Know What to Do,” “As If It’s Your Last,” and an electrifying and fiercer rendition of “Ddu-Du Ddu-Du” as they danced in shallow waters with fire in the background. Of course, “The Show” was also an opportunity for Blackpink to perform some of the tracks on “The Album” live, including “How You Like That,” “Lovesick Girls,” “Love to Hate Me,” and “You Never Know.”

Each member gifted Blinks with a solo performance in between sets. Jisoo sang a stripped-back version of Tove Lo’s “Habits (Stay High)” wearing an immaculate floral gown; Lisa showed her rapping and dancing prowess with her own spin on Doja Cat’s “Say So;” Jennie served looks and talent as she performed a revamped version of her song, “Solo;” and Rose rivetingly unveiled her highly anticipated debut solo track “Gone.”

In one of the more tender moments of the show, a throwback clip was shown, presenting Blackpink in an empty arena as they looked back at their first concert. “The concert was one of our big dreams. I was highly excited and I had high expectations. I think it was a very precious moment,” said Rose. “It was a tour that clearly showed us the relationship between Blackpink and Blinks.”

The girls also addressed their fans in the video, expressing how much they miss performing in front of them and feeling their love through cheers and waves of lightsticks. “It’s been a while since we’ve met, so I hope we can all have fun [during ‘The Show’],” added Lisa.

For their last song, Blackpink sang Forever Young as they were surrounded with messages sent by Blinks from all parts of the world to close THE SHOW on a high, hopeful note. Fans took it to social media to express how they enjoyed the livestream concert with some even holding watch parties with their fellow Blinks featuring Blackpink-themed snacks and decorations. Other Blinks also wore their merch and took out their lightsticks to really get the feel of the concert experience.

“Globe continues to provide its customers with a unique and reinvented experience through world-class partnerships — such as the one with Blackpink — together with a dependable and continuously-improving network, and access to the latest technology like 5G, LTE-Advanced Home Prepaid WiFi and Unli Fiber Plans. Indeed, Globe helps its subscribers reinvent their world amidst these challenging times,” said Issa Guevarra-Cabreira, Globe’s Chief Commercial Officer.