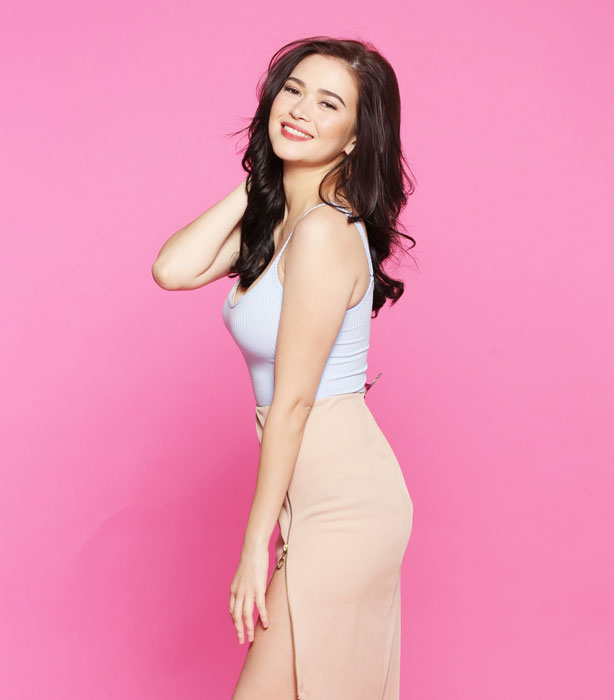 ‘To be nominated with Miss Hyo Jin and Miss Staunton who played Professor Umbridge in ‘Harry Potter,’ this ishonestly the most kilig part for me! – Bela Padilla’

They make and distribute special face masks with ventilation inside to make sure its users will not find it suffocating and difficult to breathe.

Derek has now moved to the new house he has constructed in Ayala Alabang and Andrea is often seen there but they quickly assured folks they’re not married yet or living in. Derek is with his teenage son Austin who gets along fine with his future stepmother, Andrea.

Derek has already said that he feels Andrea is the one for him and if and when they would tie the knot, both of them want it to be very simple.

“Mas gusto ko, intimate,” he said in an interview. “And I want it outdoors. Like sa Palawan.

But of course, it all depends on her, kung ano ang gusto niya.”

“I also want it to be simple,” said Andrea. “Yung piling-pili lang ang guests at kilala kami talaga personally as a couple, to make it more meaningful.”

Someone told Derek this is the first time he is talking about a wedding, something he never mentioned with his past girlfriends.

“Kasi ngayon lang ako naging sure sa pakakasalan ko,” he said. “I love it that Andrea is so family oriented. Priority niya talaga ang family niya and even my mom likes her. We also share the same values and I can see she can be a great mother. ‘Yun ang gusto ko talaga sa magiging wife ko and I know she’ll be a great mom.”

Derek and Andrea have a pending series with GMA-7, “Sanggang Dikit,” but they don’t know yet as to when they will start taping their new show.

Last year, at the Seoul International Drama Awards, Alden Richards won the Asian Star Prize. This time, the only Filipino star nominated is Bela Padilla, for her role as Juris, the foster mom fighting for her adopted child in last year’s teleserye, “Mea Culpa: Sino ang Maysala?,” which is nominated as best drama serial along with seven other foreign programs.

Bela was nominated in the best drama category with six other actresses: one from the United Kingdom, one from the Czech Republic, one from Taiwan, and three actresses from Korea, including Bela’s own Korean favorite, Hyo Jin Kong, from the show “When the Camelia Blooms.”

The British actress nominated is Imelda Staunton from the series “Flesh and Blood.” Staunton will next be seen in the fourth season of Netflix’ “The Crown,” playing Queen Elizabeth in her senior years.

Bela thanked the organizers of the Seoul Drama International Awards in her social media account. “Thank you so much for the nomination!!! and from one of my favorite countries too! Thank you!!! To be nominated with Miss Hyo Jin and Miss Staunton who played Professor Umbridge in ‘Harry Potter,’ this is honestly the most kilig part for me!”

A total of 212 entries from 41 countries shown in 2019 were screened by Seoul International Drama Awards jurors. The awards ceremonies will be held on September 13 in Korea. We hope the health crisis we’re facing now would have ended by then. Here’s wishing Bela good luck.

Other “Eat Bulaga” hosts are given their own shows.

New TV5 Pres.-CEO Robert Galang said: “Our commitment is to celebrate the lives of today’s Filipinos by providing informative as well as inspiring and uplifting entertainment content, and hopefully, in so doing, we are able to make lives, a little better, a little safer, and a little easier in these changing times.”

A major new attraction is the NBA that is now available live on Cignal TV as well as TV5 and One Sports. “The NBA coming to Cignal TV and TV5 only strengthens our position of bringing the best sports to our Filipino viewers throughout the country,” Galang said.

He and TV5 programming head Perci Intalan clarified other things. About Kris Aquino’s new talk show, they said the problem is between Kris and her blocktime producer, not with them. As a matter of fact, they welcome Kris and will be happy if she’d be a part of their network. They made it clear that they never made an offer to Coco Martin or Vice Ganda like what was erroneously reported, but they will welcome any Kapamilya star if they have the right projects for them.