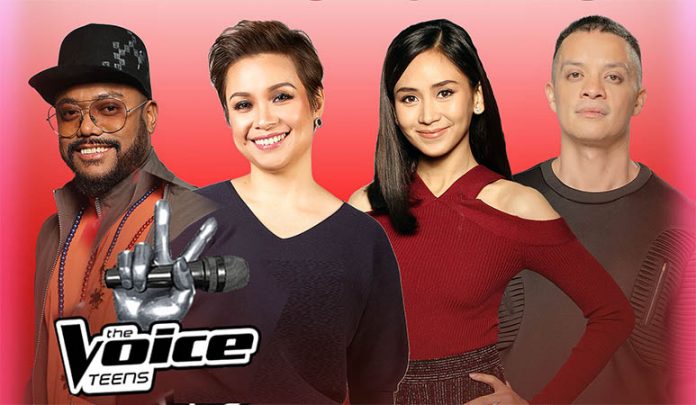 After three months of waiting, fans of the phenomenal reality-singing competition can continue rooting for their favorite artists in “The Voice Teens” as its second season returns on the Kapamilya Channel starting this weekend, June 13 and 14.

The Blind Auditions picks up where it left off, with the coaches Apl.de.ap, Sarah Geronimo, Bamboo, and Lea Salonga having already enlisted 13, 11, 12, and 11 teen artists respectively. Before going on to the next round, each coach needs to have a total of 16 teen artists on their team.

To refresh viewers, “The Voice Teens” launched an online show called “The Voice Teens Stay at Home, Sing at Home” on OKS (oks.abs-cbn.com), featuring the 47 teen artists who have already passed the Blind Auditions. In the show, the artists check in on their respective coaches via Zoom and talk about their lives while in quarantine. Each teen artist also showcases a performance of their chosen song.

Now with ten episodes, “The Voice Teens Stay at Home, Sing at Home” will continue to stream every Thursday and Friday starting June 11 and 12.

In the coming episodes of “The Voice Teens,” the coaches will continue fighting for their coveted artists in the Blind Auditions, where they have the power to ‘block’ other coaches from going after an artist.

After the coaches fill up their 16-member teams, they will move on to the fiery Battle Rounds, where two artists from each team will battle with each other. The stakes will get high for the coaches because they can also “steal” a losing artist from another team who will advance to the Knockout Rounds.

Meanwhile, nine teen artists from each team will compete in three-way showdowns in the Knockouts. With only one teen artist per group to win, the three teen artists per team or the top 12 contestants of the season will advance to the Live Shows.

“The Voice Teens” will air on Kapamilya Channel (SKYcable channel 8 on SD and channel 167 on HD, Cablelink channel 8, G Sat channel 2, and most cable operators under the Philippine Cable and Telecommunications Association (PCTA) nationwide. Check mysky.com.ph and contact cable operators to know the channel assignments in other areas in the country.