Now cancer-free and newly-married, Maritoni Fernandez, 51, is said to be considering the idea of returning to acting.

Maritoni started her career as a teenager in Regal, where she had Sylvia Sanchez, who is a few years older, as a contemporary.

She has two kids: Lexi and Liam. Lexi is her daughter with Alex Alvarez and Liam is her son with Hans Montenegro.

Lexi is as pretty as her mom. She is now 25-years-old and used to be with GMA Artist Center.

In September, actress and former Miss International Lara Quigaman will give birth to her third son.

She and husband Marco Alcaraz’ two younger boys are named Noah and Tobias.

Last seen in the top series, “The Killer Bride,” Lara hopes to be busy anew after she gives birth.

She is regularly seen as a co-host of the “700 Club Asia,” which is aired weeknights on GMA 7.

Fashion model and beauty queen Loren Burgos was also part of the cast of “The Killer Bride.”

Loren is now a model coach in the modelling agency of Farah Ramos, who is also a former ramp and commercial model.

“Sayang nga,” said Farah, “dahil because of the lockdown, kinailangan mag-shut down muna kami. But we will be back soon this July.

Farah is a graduate of Miriam College. Her mom is entertainment columnist and writer Chit Ramos.

Farah also teaches Fashion Presentation and Communication at iAcademy in Makati. Right now, she does online workshops on the same subjects, plus also teaches English and Public Speaking.

It seems the real thing between sweethearts Ruru Madrid and Bianca Umali.
Ruru is already close to Bianca’s family, especially to her grandma.

But settling down seems far from their minds. Bianca is currently busy with her music. Her debut single, “Kahit Kailan,” has been streamed more than 5000 times on Spotify. The single is also available on Apple Music and Youtube.

Ruru is also doing well. He was in the series, “TODA One I Love,” where he was greatly admired for his performance. He is said to be starting a new program soon on GMA. 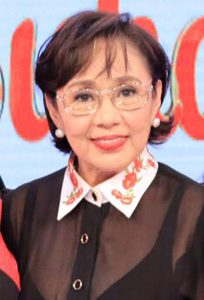 Lipa Representative Vilma Santos-Recto knows that one of those who will be greatly affected by the non-renewal of the ABS CBN franchise is her son, Luis Manzano, one of busiest hosts of the network.

Before the lockdown, Luis was the host of “The Voice Kids” and “I Can See Your Voice,” two of the most popular shows of ABS-CBN.

But Luis reportedly assured his mother not to worry. He also tweeted how proud he is of her.

The actress-politician was among the 11 members of Congress who voted for the renewal of the ABS-CBN franchise. Seventy other congressmen disagreed and voted for its denial.

“Something good will still happen. We need to pray more lang.”

“He told me na nagdarasal siya for the best to happen,” she recalled.