‘James and Nadine have yet to show any favorable reaction to their messages. But hope springs eternal, so here’s hoping that James and Nadine are doing this to save their showbiz careers.’

JUST because they posted their pictures together, some JaDine fans are now jumping to the conclusion that James Reid and Nadine Lustre have reconciled. The photos show them sharing the same spot in James’ house where Nadine used to live with him for almost three years.

The rumors that James and Nadine broke up started late last year but they denied it. Nadine even had a squabble with some reporters about it, only to recant it later and admit that, yes, she and James have indeed parted ways, but they remain good friends.

The recent photos elicited so many positive comments from their expectant fans, all carrying the same message: they’re hoping James and Nadine have really kissed and made up. Some fans even said that it proves that fate really meant for them to be together and it now looks like they have already realized that they really cannot live without each other. 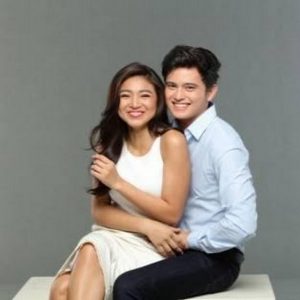 Well, what can we say? The fans can really be so presumptuous, but James and Nadine have yet to show any favorable reaction to their messages. But hope springs eternal, so here’s hoping that James and Nadine are doing this to save their showbiz careers. As we all know, both of their careers took a steep nosedive not only after they broke up but also after James left Viva who built him up and Nadine even tried to follow suit despite her last two films, “Ulan” and “Indak,” being both certified flops.

Since then, they haven’t had any projects on the big screen or on TV, and also no more endorsements. At this point when the industry is also down and even more established stars are wondering where their careers could be going because of the corona lockdown, only a miracle can save their careers.

Megan Young says that due to the lockdown, they were able to sort out the thousands of photos taken during her and Mikael Daez’ two weddings, one in Tagaytay and one in Subic. She posted the ones she has chosen for public consumption online and netizens were so amused by the captions she and Mikael wrote with the photos. In one photo showing Megan cutting their wedding cake, here’s what Mikael wrote: “I’m wondering, why was Boneezy (his pet name for Megan) so scared of cutting that delicious strawberry shortcake?? Maybe she realized that she was cutting away her freedom.”

You can take a look at their other wedding photos in their vlog. Megan shares that the quarantine has made her more appreciative of even the little things around them while they stay in their condo.

“When I need a boost of happy thoughts, I just think of all the ‘wins’ that I’ve had throughout the week – random things that made me happy during the week,” she said.

For the first time, Megan also admitted that she got jealous of Andrea Torres when Mikael was doing one show after another with her. It will be recalled that Mikael and Andrea became successful as a love team for a while and they did several soaps. At that time, Mikael was already going steady with Megan, but they kept it secret. In their podcast as a couple called “Behind Relationship Goals,” Megan confessed that when Mikael was first paired with Andrea in the afternoon series “Sana ay Ikaw na Nga,” she got jealous somehow when he said he took Andrea home after taping.

“I was like, ‘Uh, what?’ Natigilan talaga ako. You made her hatid sa bahay niya? It’s cool because love team nga kayo, but what I’m worried about is what kind of thoughts are you putting in her head. I think Andrea was single at that time at baka isipin niya na may gusto ka nga sa kanya. I don’t want you to put these kinds of expectations in your love team.”

Mikael explained that he just wanted to have a good working relationship with Andrea for their love team to succeed. Megan got his point and now, Andrea is one of their closest friends as a couple. As we all know, Andrea is now on with Derek Ramsay with whom she’s doing a new show, “Sanggang Dikit.” Megan, in turn, is doing a new drama with Dennis Trillo, “Legal Wives,” while Mikael is in “Love of My Life” and also appears with Dennis in “My Husband’s Lover” that is now being shown on primetime.

Everyone is going online. Most stars now have their own social media account, vlog or youtube channels where they can communicate directly with the fans. Even top singers now just have their concerts online where they don’t earn anything as it’s for free.

Honestly, we think being constantly present on the internet will just have a negative effect on their careers as they most certainly lose their mystique as celebrities. They used to be on a pedestal, hard to reach, but now they’ve become as common as any ordinary netizen who wants to get noticed online.

They’ve also opened themselves up freely to everyone, especially to haters and bashers who just delight to annoy celebrities to give some excitement to their own boring lives. Because they made themselves accessible to every Tom, Dick and Harry, they give the chance even to strangers to treat them badly, binabastos sila, o minumura sila just to annoy them. Another downside of this is people might no longer be interested to see them in movies where they have to pay, since they can now be seen online for free.

Now, even the top networks also have their own shows online. We can understand ABS-CBN if they currently use Facebook or YouTube as an outlet since their franchise has yet to be renewed. But GMA, their free TV channel GMA-7 is still very much active, but they now have so many shows online for GMA Artist Center with virtual entertainment through a series of online shows. GMA Artist Center (GMAAC) talents continue to interact with their fans via online shows like “#ArtistHideout,” ”Just In,” ”E-Date Mo Si Idol,” and ”Quiz Beh!” “#ArtistHideout” offers “PareKuys”, “Wednesday Coolitan,” and “Yummy Thursdays,” all hosted by comedian Tetay.

And then there is “E-Date Mo si Idol,” GMAAC’s exciting online dating game show. Viewers may date your favorite Kapuso right from the comforts of your homes and share kilig and funny moments with your idol.

Lastly, watch out for your favorite Kapuso stars as they gather online for a quick playtime, hoping to give you smile and spread good vibes during these trying times via “Quiz Beh!” beginning May 29. This will be hosted by actor, singer and comedian Betong Sumaya. These shows and more are on the Facebook page and YouTube channel of GMA Artist Center.

Diaz qualifies for Tokyo, shifts focus to winning a medal

J&J, other drugmakers to face trial in California over claims they...