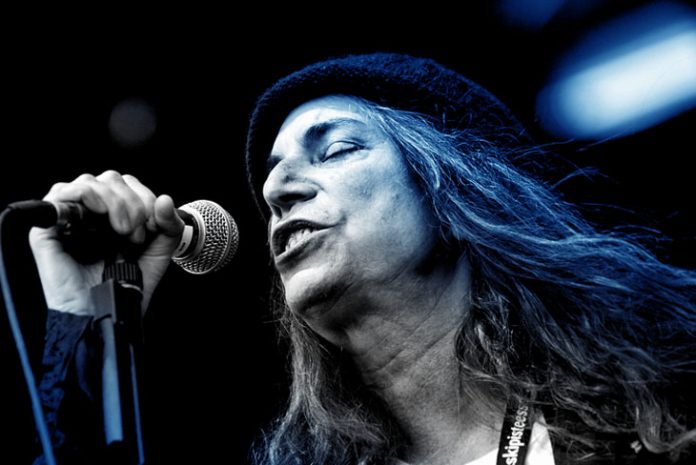 LONDON – Since punk rock pioneer Patti Smith agreed to write the introduction to a new version of “De Profundis,” the anguished letter Oscar Wilde wrote from jail to his former lover, she has had plenty of opportunities to reflect on incarceration.

Smith, whose poetic lyrics and androgynous appearance earned her cult status in the 1970s, should be on a world tour now. Instead, she is stuck at home in New York City, where she has been isolating since Mar. 15 due to a chronic lung condition.

She said she had felt “very confined and very restless,” but was trying to keep it in perspective by remembering Wilde and others unjustly imprisoned for their politics or their sexuality – something she described as “horrifying.”

“I tried to remember and tried to think about what they’ve gone through and how light a sentence that we have right now,” said the 73-year-old, who once mingled with the likes of Andy Warhol and Janis Joplin.

“We’re only to confine ourselves, for our own health and for the health and safety of others,” she told the Thomson Reuters Foundation by phone.

Smith likened the current pandemic to the HIV/AIDS epidemic that swept through New York in the 1980s, saying both took away our freedom of choice.

But the coronavirus outbreak that has forced New York into lockdown has garnered political attention far more quickly than HIV/AIDS did, she said, blaming the stigma attached to a virus that was initially thought to affect only gay and bisexual men.

Smith lost as many as 200 friends to AIDS, including Robert Mapplethorpe, the celebrated LGBT+ photographer with whom she shared a deep friendship and artistic relationship.

“People had spent decades hiding their persuasion or fighting their nature. And then suddenly with so much openness and gay rights… people felt liberated,” she said.

“AIDS had taken away that abandonment. And it’s the same with this pandemic.”

That Wilde wrote his “master work” in the darkness of Reading Gaol was a reminder “that we have the duty, even in a situation that we’re in, to magnify the best of ourselves,” Smith said.

The Irish poet and playwright was jailed from 1895 to 1897 for gross indecency, an offence that at the time criminalized gay sexual activity in Britain. He died in 1900, aged just 46.

“He didn’t murder anyone. He wasn’t a thief. He wasn’t a criminal,” said Smith, reflecting on the introduction she wrote before lockdown for a new edition of “De Profundis” published by The Folio Society.

“He had a loved-one of his own sex, and for that he was imprisoned, put in chains, stripped of his reputation … which led to an early death.”

Same-sex relations are still a crime in 70 countries, according to advocacy group ILGA-World.

Smith, with the shaggy haircuts and shirt and trouser outfits of her youth, has herself been an inspiration for many people who want to shake off gender stereotypes.

But she said she was “crucified” by feminist activists when she moved from New York to Detroit in 1980 to marry MC5 guitarist Fred “Sonic” Smith and raise their two children.

“At this point in my life, being 73, gender is completely unimportant to me, except in the ways that it affects health and being a mother,” said Smith, adding that her fight had been for everyone to escape labels of all kinds.

“To be able to attain the label of pure artist without being called a black artist, a female artist. Because they don’t do that for Picasso.”

Smith moved to New York City in 1967 aged 20, leaving behind a working-class childhood in Chicago, Philadelphia and southern New Jersey, and at first she struggled to find work to fund her poetry and art.

She met Mapplethorpe by chance and they formed an inseparable artistic and personal bond, living in the Chelsea Hotel from 1969 to 1972 and encountering Jimi Hendrix, Grace Slick and other famous artists.

Mapplethorpe, who was infamous for his work depicting gay sadomasochistic sex, photographed Smith for some of her most famous album covers, including “Horses” and “Wave.”

She said her friend’s first reaction to the coronavirus pandemic would have been concern for her.

“He would want me to wear a mask all the time,” Smith said. “Robert would probably have a black leather mask … He would make certain that he had a very cool mask.”