The average price in the wholesale electricity spot market (WESM) jumped by more than 76 percent in September on improved demand, according to the Independent Electricity Market Operator of the Philippines (IEMOP). 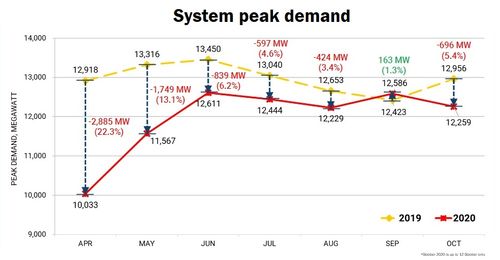 But IEMOP said the growth may not be sustained in the remaining months of the year as cooler temperatures brought by frequent rains have tempered electricity consumption.

“La Niña is expected to be experienced until first quarter next year. With that assumption, demand for the remaining months of the year may still not breach 2019 levels or even get lower…. If the National Capital Region gets upgraded to modified general community quarantine, (that) could trigger an increase in demand,” Garayda said.

He said sudden power plant outages and emergency trippings will also play a role in the behavior of market prices.

For the first 12 days of October, the average market price of power in the WESM is at P2.19 per kWh while average demand is at 9,987 MW and a peak demand at 12,259 MW. These figures are lower from the entire September’s figures.

All the figures only reflect the Luzon and Visayas grids.