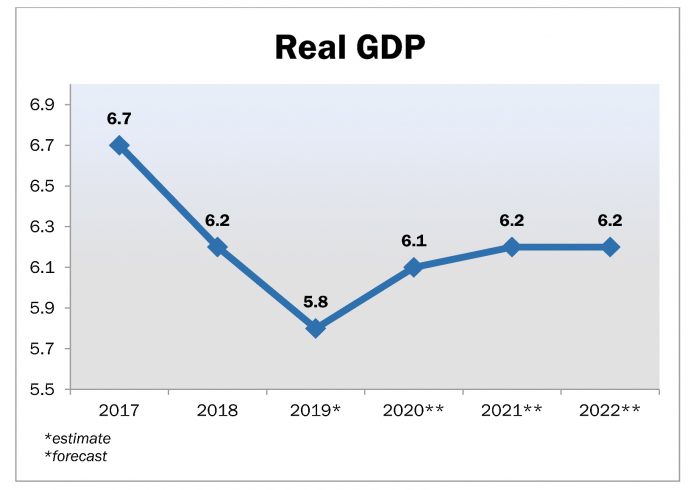 The World Bank has maintained its growth forecasts for the Philippines, at 5.8 percent for 2019 and above six percent until the end of the administration’s term.

According to the Global Economic Prospects report released by the Washington-based agency yesterday, the economy is projected to grow by 6.1 percent this year, and 6.2 percent in the next two years.

These figures are the same as those released by the multilateral agency in its Philippine Economic Update report last October.

The government previously reported that the Philippine economy expanded by 6.2 percent in the third quarter of 2019, the fastest growth recorded so far during the said year.

In October, the World Bank slashed its growth projections for the Philippines as the Washington-based agency considered the impact of global developments, as well as the sharp slowdown in investment growth in the first half of 2019.

The multilateral agency then said the weakening global economy, rising protectionism, the United States-China trade spat, and the slowdown in public investments in the Philippines in the first half of 2019 have tempered the country’s growth prospects.

However, the World Bank said economic growth is expected to surpass six percent in 2020 to 2021 as the impact of the budget delay dissipates, private consumption growth remains robust, and uncertainties around the passage of tax reform program dissipate soon.

The World Bank elaborated last year that strong private consumption – due to lower inflation, higher employment rates, robust remittances and rising wages – and a recovery in public investment spending will keep the economy buoyant. Also, the services sector will drive growth fueled by the continuing expansion of financial services and tourism.

Meanwhile, the World Bank said in its latest report global economic growth is forecast to edge up to 2.5 percent in 2020 from the projected 2.4 percent last year as investment and trade gradually recover from last year’s significant weakness, but downward risks persist.

Growth among advanced economies as a group is anticipated to slip to 1.4 percent in 2020, from the estimated 1.6 percent last year, in part due to continued softness in manufacturing, the agency said.

Growth in emerging market and developing economies is expected to accelerate this year to 4.1 percent, from 3.5 percent. The World Bank said this rebound is not broad-based; instead, it assumes improved performance of a small group of large economies, some of which are emerging from a period of substantial weakness.

About a third of emerging market and developing economies are projected to decelerate this year due to weaker-than-expected exports and investment, the World Bank said.

“Steps to improve the business climate, the rule of law, debt management, and productivity can help achieve sustained growth,” the bank official added.

SANTA ON A BIKE: Bike Camper pedals around the city to make...