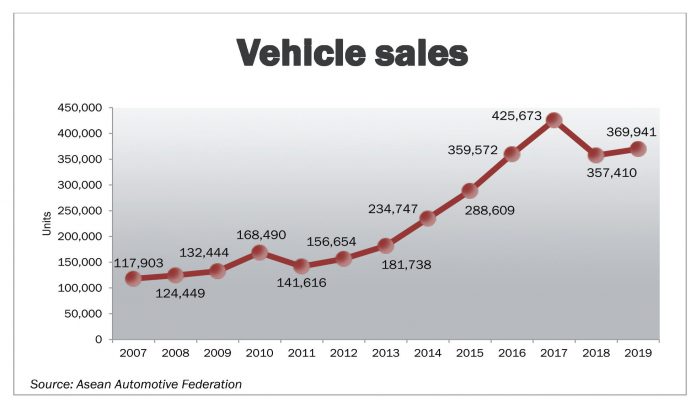 Vehicles sold by members of the Chamber of Automotive Manufacturers of the Philippines Inc. (Campi) and the Truck Manufacturers Association (TMA) grew 3.5 percent in 2019, off its 10-percent growth target for the year.

Rommel Gutierrez, Campi president, said ending 2019 with positive figures is a welcome relief for the industry coming from a double-digit decline the previous year.

“The year 2019 has been challenging for the industry due to various internal
and external factors. Thankfully the industry’s collective efforts, supported by sustained
economic growth, have paid off. We will not rest on our laurels as we aim for further
growth in the coming months, and hopefully for the whole of 2020,” Gutierrez said in a statement.

Full-year growth was tempered by the 2 percent decline registered in December when sales stood at 33,715 units from 34,465 units in November.

Leading in both passenger cars and in commercial vehicles, Toyota Motor Philippines Corp. (TMP) continued to eclipse all assemblers with 162,011 units sold for the year.

TMP also bucked industry trend with a growth of 11 percent from 153, 004 units sold in 2018 but retaining its market share of 43 percent.

Mitsubishi Motor Philippines Corp. was at second with 64,065 units sold, a 17 percent market share but 5 percent down from 67,512 units the previous year.