Vehicle sales and output in Asean fell drastically in the first eight months of the year due to the pandemic-induced slowdown in demand and operations with the Philippines taking a big hit.

In its report, the Asean Automotive Federation (AAF) showed total sales of two-wheel vehicles in the Philippines as of August plunged 47.6 percent to 123,489 units from 235,544 units a year ago, ranking the country as fifth biggest market in the region or just 9 percent of the 1.4 million units, down 38 percent. 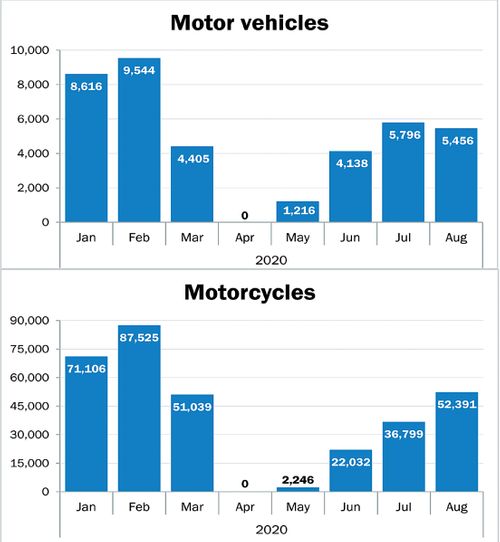 Motorcycle sales in the Philippines plummeted 39 percent to 678,463 units from 1.11 million units last year, making the country the second largest market in Asean. That volume is about 34 percent of total regional sales of 1.98 million units, down 27 percent from 2.7 million last year.

In terms of production, the Philippines ranked fifth with 39,171 two-wheel vehicles manufactured, down 33 percent from 58,386 units last year. The region’s output fell 41 percent to 1.64 million from 2.8 million units a year ago.

That is still the second-highest output in the region which produced 1.53 million units, down 2.4 million units a year ago.

Mandiators by Jojo Bragais: Why blend in if you can stand...

Bigger than any single man (or woman)

What? No complaint filed vs Ayo?

Angkas, Joyride back in the streets