As automotive production continues to slump,  electric vehicle (EV) proponents said it is now time to  pursue this new technology in manufacturing as  an option to recover part of the lost business from completely knocked-down (CKD) assembly.

The Asean Automotive Federation reported vehicle production in the Philippines declined 30 percent from January to November of 2020  to 61,257 units from 87,864 units in the same period in 2019.

Ferdinand Raquelsantos, chairman of the Electric Vehicle Association of the Philippines (EVAP) is bullish of the prospects of EVs as clean technology gradually replaces internal combustion engine-powered vehicles.

EVAP and Raquelsantos’ own company PHUV Inc. started as early as 2007  the production of e-jeepneys. 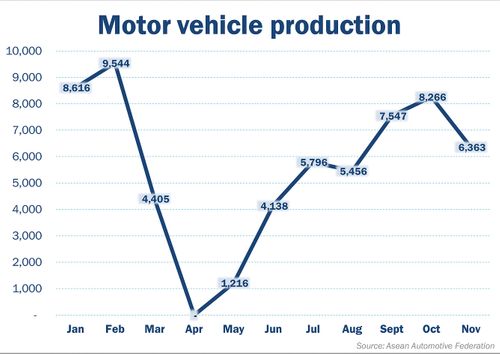 Raquelsantos said while the Philippines had a headstart and there are investors interested, government support is needed for the EV industry to flourish.

He expressed hope the EV bill now in bicameral conference committee will be passed — after six years — during this current Congress as this will provide incentives to the industry.

“Government support can make exporting EVs at zero tariff  to Asean. Countries in the region can buy from us instead of say, China,” Raquelsantos said.

According to Raquelsantos, the jeepney modernization is a good start as this will help boost adoption of EVs.

He said there are local bodybuilders that can support the industry.

Foreign investors can tie up with local companies and put into good use  idle plants vacated by some assemblers.

Nissan Philippines Inc. announced it will halt assembly operations starting March, joining a string of assemblers that are shifting to importation.

For  Raquelsantos, this is alarming, especially for PPMA.

“Local CKD assembly has been going down for the past years and this has been aggravated by the pandemic. Even the Comprehensive Automotive Resurgence Strategy which is supposed to help the parts industry has been affected,” Raquelsantos said.

He added the safeguards on imported vehicles is their last hope as this will stem the exodus of assemblers.

Partsmakers early in the lockdown stopped operations, resulting in 35 percent cut in employment.

Across the industry —   parts and vehicles and sales and  production — business is down 60 percent, Raquelsantos said.

He said exports of parts cannot compensate for lost business because local cost is not competitive compared to Thailand which has economies of scale.

He expressed hope of a slight improvement this year.

Data from AAF showed the Philippines accounted for just 2 percent of total vehicle production in Asean and landed at fifth among the six car-producing countries in the region.

KZ proud to sing ‘Gabay’ for Disney’s ‘Raya and the Last...