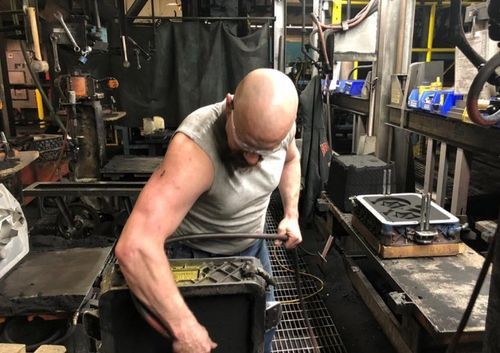 WASHINGTON – US factory activity slowed in early February likely as a global semiconductor chip shortage hurt production at automobile plants, while prices of inputs and manufactured goods soared, which could heighten fears of strong inflation growth this year.

The report from data firm IHS Markit on Friday also showed businesses in the services industry were experiencing higher costs related to the procurement of personal protective equipment, a greater proportion of which they were passing on to clients “through a marked rise in selling prices.”

Inflation is being closely watched amid concerns from some quarters that President Joe Biden’s proposed $1.9 trillion COVID-19 rescue package could cause the economy to overheat. The package would be on top of nearly $900 billion in additional fiscal stimulus provided at the end of December.

“A concern is that firms’ costs have surged higher, driving selling prices for goods and services up at a survey record pace and hinting at a further increase in inflation,” said Chris Williamson, chief business economist at IHS Markit.

IHS Markit’s flash US manufacturing PMI dropped to 58.5 in the first half of this month from a final reading of 59.2 in January. Extreme weather in large parts of the United States was also blamed. The data was in line with economists’ forecasts.

A reading above 50 indicates growth in manufacturing, which accounts for 11.9 percent of the US economy. Manufacturing has powered ahead as the pandemic left Americans grounded at home, shifting demand to household goods from services like airline travel and hotel accommodation.

But the coronavirus has disrupted labor at both suppliers and manufacturers, leading to shortages of goods critical to the production processes. Motor vehicle manufacturers have been hit by a semiconductor chip shortage, leading some to temporarily close assembly plants this month.

General Motors announced it would take down production entirely at its Fairfax plant in Kansas City during the week of Feb. 8. Ford Motor has reduced shifts at its Dearborn truck plant and Kansas City assembly plant.

The supply chain bottlenecks, which are widespread across the manufacturing sector as well as the services industry, have led to higher prices for inputs, including raw materials.

Though price pressures are expected to rise as last year’s low readings drop out of the calculation, there is no consensus among economists whether higher inflation would stick beyond the so-called base effects.

Federal Reserve Chair Jerome Powell said last week while he expected inflation to be boosted by base effects and pent-up demand when the economy fully reopens, that would be transitory, citing three decades of lower and stable prices.

The inflation outlook will likely hinge on the labor market, which is currently experiencing considerable slack, with at least 18.3 million Americans on unemployment benefits.
While the manufacturing expansion cooled, activity in the services industry gained traction this month.

The IHS Markit’s flash services sector PMI edged up to 58.9 from a final reading of 58.3 in January. The highest reading since March 2015 came as new COVID-19 infections and hospitalization rates dropped, allowing authorities to roll back some restrictions on consumer-facing businesses.