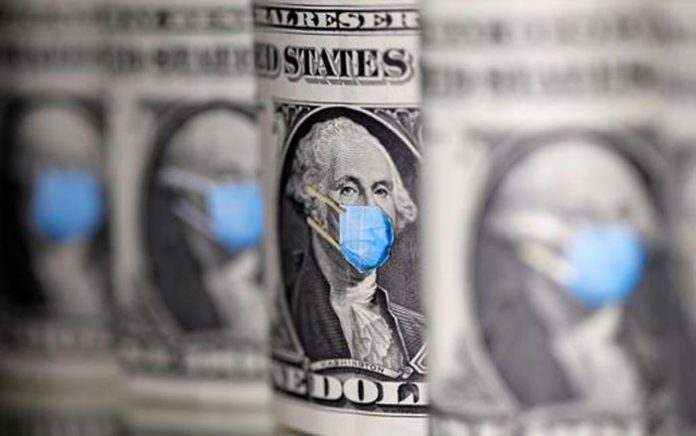 BENGALURU- The US economic outlook has darkened in the past month amid renewed lockdowns in some states from surging coronavirus cases, according to economists in a Reuters poll who warned of a high risk the job recovery underway reverses by year-end.

US coronavirus cases approached 4 million on Thursday, with over 2,600 new cases every hour on average, the highest rate in the world, and some state governments have reimposed restrictions aimed at curbing the spread of the virus.

That has raised concerns about the sustainability of the recent rebound in hiring and other economic data, as the world’s largest economy, which was propping up global growth before the pandemic, climbs out of a deep hole.

The July 13-22 poll showed the economy contracted 33.8 percent last quarter on an annualized basis but while it was expected to bounce back with 17.8 percent growth this quarter and expand 6.5 percent in the following three months, that was weaker than the 18.5 percent and 8.0 percent respective growth predictions made a month ago.

“The current situation presents two risks: Some states might need to shut down more consumer activity to get the virus under control, and the stall in the reopening process might cause longer-term damage to businesses and the labor market,” said David Mericle, chief US economist at Goldman Sachs.

Goldman recently lowered its Q3 growth forecast to 25 percent, still well above the poll median, from 33 percent previously. Several banks have reduced their Q3 forecasts in succession in recent months.

In the latest poll, a majority either downgraded or left their forecasts unchanged from last month, with the magnitude on average of those downgrades much bigger than the upgrades, disputing the “V”-shaped recovery expected by financial markets.

The wider poll suggested weaker growth next year, with medians downgraded for the first half of 2021 compared with the June poll.

Nearly two-thirds of economists, or 35 of 56 who responded to an additional question, said it would take two or more years for the US economy to reach its pre-COVID-19 levels.

The others said it would take place in one to two years, with no respondent predicting it to take less than a year.

In the meantime, the Federal Reserve is expected to keep the federal funds rate unchanged at a record low of 0-0.25 percent until at least 2023. Forecasts for all measures of inflation barely changed in the latest Reuters poll.

“Even as the Fed maintains its ultra-loose policy stance and Congress provides further fiscal support, ongoing social distancing requirements are likely to keep GDP well below its pre-virus trend and the unemployment rate elevated over the coming years,” said Paul Ashworth, chief US economist at Capital Economics.

All but one of 60 economists said the outlook for the strength of the US economic recovery had either remained about the same or worsened over the past month.

Nearly 60 percent, or 32 of 56 economists, said the risk the job recovery underway reverses by the end of this year was high or very high. Twenty-three said the risk was low, while only one said it was very low.

“Epidemiologists believe there is a strong likelihood of a second wave of infections in the fall/early winter. This is a typical pattern for respiratory infections,” said Daniel Bachman, senior US economist at Deloitte, who forecasts a renewed contraction in the fourth quarter, by 9.8 percent, the most pessimistic view in the poll.

“It’s not certain such a second wave will occur – but if it does, we believe this could suppress economic activity and give us a negative fourth quarter. Since the epidemiological analysis has the second wave as likely, we include it as an assumption in our baseline forecast.”

Trump sought the world’s attention and got it; now the White...