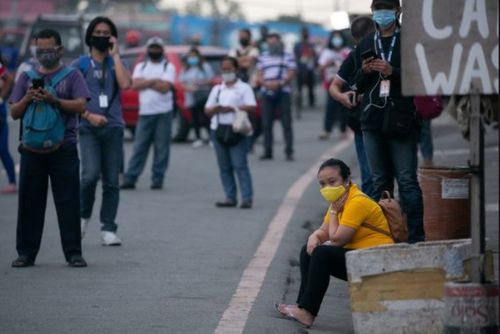 The country’s unemployment rate has eased in October versus July, but there were less people who were actively employed or seeking jobs during the period, data released by the Philippine Statistics Authority (PSA) yesterday showed.

The latest Labor Force Survey (LFS) showed the country’s unemployment rate improved to 8.7 percent in October 2020 from 10.0 percent in July and 17.6 percent in April.

This translated to 0.8 million less unemployed workers in this round, with 3.8 million jobless individuals in October, compared with 4.6 million unemployed in July 2020.

However, the National Economic and Development Authority (NEDA) also said the lower labor force participation more than offset this, resulting in a net employment reduction of 1.5 million from July to October.

“The improvement in the unemployment rate was driven by the reopening of the economy and it could have been lower if the economy were opened further, coupled with the provision of safe and sufficient public transport. On the other hand, the country was also hit by a succession of four typhoons in October alongside the monsoon and La Niña, resulting in significant employment loss in agriculture,” Karl Kendrick Chua, NEDA acting secretary, said in a statement yesterday.

In the latter half of October, the country was hit by typhoons Nika, Ofel, Pepito and Quinta which contributed to the reduction of agriculture employment by 1.1 million, or about 70 percent of the 1.5 million jobs lost between July and October 2020, NEDA said.

Workers in the provinces also faced difficulty in returning to work given inter-province transport restrictions, and contributed to the 0.5 million loss in the industry sector, it added.

The agency said the employment loss was tempered by the services sector, which recorded a 0.3 million gain in employment relative to July 2020, as it benefitted from the increased operational capacity and further relaxation of quarantine restrictions.

The PSA meanwhile said the labor force participation rate (LFPR) in October 2020 was 58.7 percent or 43.6 million Filipinos reported as either employed or unemployed, down from the 61.9 percent LFPR in July, consisting of 45.9 million in the labor force.

This is the second lowest LFPR reported in the history of the Philippine labor market following the record low of 55.7 percent reported in April 2020, the PSA said.

The agency said this can be attributed to a number of factors, including higher remittances and the opening of school with parents shifting from work to accompanying younger children in blended learning from home.

Claire Dennis Mapa, national statistician, echoed the same, saying there are many reasons for the decline in the labor force participation, one of which is school has started.

“Normally there is seasonality and the start of schooling has an effect. (It’s) partly (the reason but it) will not explain all the reduction. The reduction is quite large, to account for such. We will have to look at who these individuals are, who opted out of the labor force,” Mapa said in a virtual briefing.

According to Mapa, the unemployment rate recorded in October 2020 is the highest for all the October rounds, since there was a consistent recording of the definition of employment and unemployment in 2005.

“The average unemployment rate for the year is 10.4 percent. Based on our historical data, this is the highest since 2005. In terms of the number of Filipinos (that would be) more or less about 4.5 million,” he added.

“Decreasing underemployment means that the quality of jobs is improving. This proximity to normalcy means that the informal sector is performing and the impact on poverty may be less severe than initially estimated,” Chua said. (A. Celis)