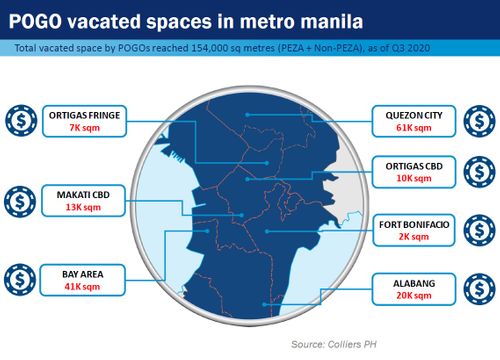 Joey Bondoc, head of research of Colliers Philippines, in an interview said at least 150,0000 square meters (sq.m.) of office space have been vacated by POGOs in the first nine months of 2020 while David Leechiu, chief executive officer of Leechiu Property Consultants told ANC POGOs left 300,000 sq.m. unoccupied last year, or 20 percent of total space for the year.

Bondoc said most of those vacated are in the Bay Area and in Alabang.

According to Bondoc, the 5-percent tax has raised the cost of doing business in the Philippines although POGOs also consider other factors in setting up operations in the country.

“They consider other factors before the tax issue. POGOs enjoyed and benefitted the integrated lifestyle in Metro Manila particularly in the Bay Area where their office buildings are near their residences, near retail, restaurants,” he said.

In his interview over Market Edge, Leechiu expressed confidence the temporary restraining order will stem the exodus of POGOs which would have meant another 200,000 to 300,000 sq.m would have been. lost in the next six months.

Leechiu believes the worst may be over for the property market judging from the pre-selling activities of developers, sales of restaurants which have been on an uptrend as well as the opening up of tourism.

He said the infrastructure projects that are coming online in the next 18 months will “introduce a new level of Philippines” where people can move more conveniently.

Leechiu also said real estate is the best asset nowadays despite the pandemic especially since the stock market has been down.

He added the business process outsourcing industry will continue to grow this year. (I.Isip)