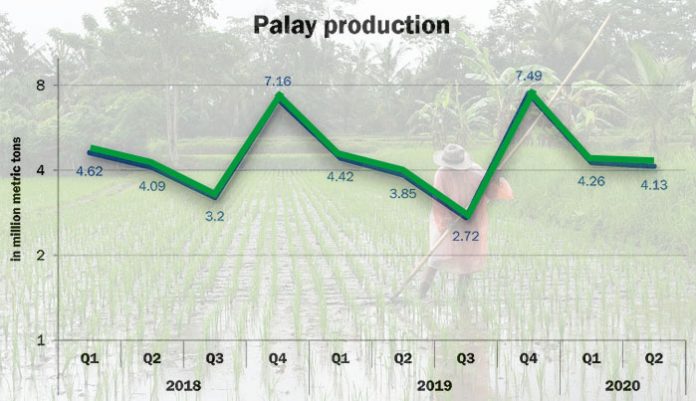 The Federation of Free Farmers (FFF) downplayed the reported gains in palay output in the second quarter this year and urged the Department of Agriculture (DA) to address deficiencies in its support delivery system for rice farmers.

The group said the 7-percent growth in the second quarter is not surprising as the comparative period last year was affected by the El Nino dry spell.

Raul Montemayor, FFF national manager, said while the yield of irrigated areas increased by only 4 percent in the second quarter, harvests from rain-fed areas jumped by almost 27 percent, indicating the incremental output was mainly due to better weather and water availability for non-irrigated farms.

“Output from irrigated areas actually contracted by about 1 percent in January to June 2020 compared to 2019. What saved the day was the 12- percent increase in production from rain-fed farms which allowed the sector to register a 1.4 percent overall increase for the (first half),” Montemayor said.

He said the DA’s efforts under the Rice Competitiveness Enhancement Fund (RCEF) and other support programs seem to be falling short of expectations.

“The first semester of 2020 covers the first round of RCEF assistance, during which some P2 billion in free seeds were given to farmers together with training and credit support.

However, the output during this period was almost 4 percent lower than that in 2018 when RCEF was not yet in place,” Montemayor said.

FFF said the DA must review its support delivery strategies and mechanisms to ensure funds allocated in the rice sector are not wasted.

He said there are reports of delayed deliveries of seeds, substandard seeds with low germination rates and the provision of seed varieties which farmers find not fit to their farmlands’ soil condition.

The group said the DA should also look into reports some local government units have allegedly been charging farmers for delivery and facilitation fees for the free seeds.

It also received reports some farmers get multiple rations of subsidized seeds.