Faster price increase for some food items like meat and fish caused inflation to slightly rise to 2.5 percent in October, data from the Philippine Statistics Authority (PSA) showed.

This brings the year-to-date inflation for 2020 to 2.5 percent, near the low-end of the government’s full-year target range of between 2 and 4 percent. 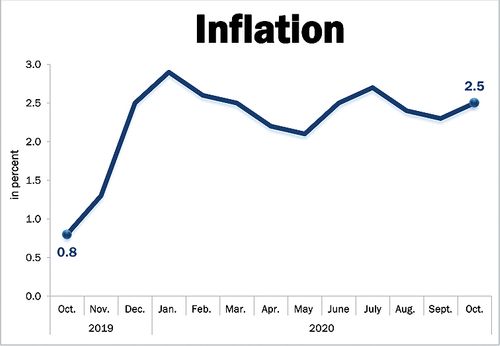 PSA said the higher overall inflation was primarily brought about by the increase in the inflation of the heavily-weighted food and non-alcoholic beverages at 2.1 percent.

The meat index jumped to 4.7 percent during the month as pork prices increased due to some tightness in supply brought about by the African swine fever (ASF).

The other food groups such as rice, corn, and vegetables continued to register negative annual rates during the month.

Mark-ups were also higher in the indices of education at 1.2 percent, and restaurant and miscellaneous goods and services, 2.4 percent.

Core inflation, which excludes selected food and energy items, however, decelerated to 3.0 percent in October 2020, from 3.2 percent in the previous month.

“The balance of risks continues to be on the downside due largely to the impact of domestic and global economic activity of possible deeper economic disruptions caused by the coronavirus pandemic,” Diokno explained.

Karl Kendrick Chua, acting socioeconomic planning secretary, however, said upside risks such as the adverse impact of inclement weather and the lingering presence of the ASF remain.

“Aside from the ongoing pandemic, the country has been facing adverse weather conditions in the recent months. Effects of typhoons and La Niña on the agriculture sector and food prices pose upside risks to inflation,” Chua said.

He said although latest projections from the Department of Agriculture (DA) show that supply of key food products is likely to remain sufficient until the end of the year, agricultural damage may put food supply at risk, and thus put pressure on prices.

Chua cited the need to tap local producers in nearby provinces or regions to make up for the lost harvest in disaster-stricken areas.

He said support to the agriculture sector is also needed due to the continued presence of ASF in the country, which has resulted in tighter supply and higher prices of pork in Luzon.

Some analysts say with inflation still at the low-end of the target range, it is likely t the policymaking Monetary Board will keep the prevailing key rates of the BSP.

Based on the assessment that prevailing monetary policy settings remain appropriate, the Monetary Board last month maintained the interest rate on the BSP’s overnight reverse repurchase (RRP) facility at 2.25 percent.

The interest rates on the overnight deposit and lending facilities were likewise kept at 1.75 percent and 2.75 percent, respectively.

The next monetary policy stance meeting is scheduled on November 19.

Jun Neri, Bank of the Philippine Islands lead economist, said inflation will most likely “stay within the target of the BSP until the end of the year given the favorable outlook for oil, but the expected increase in pork prices may keep inflation above the policy rate.”

He said, “inflation has been stable and manageable in recent months given the behavior of oil and the exchange rate.”

“A possible rebound in imports in the coming months amid the reopening of the economy may push the exchange rate above P49 and contribute further to inflation. Hence, additional rate cuts from the BSP are unlikely in the near term since doing so will expand the negative gap between the policy rate and inflation,” Neri said, adding economic activity has also shown some improvements, thereby reducing the need for additional rate cuts.
Nicholas Mapa, ING Bank senior economist, said a pause from BSP is likely into 2021.

“Governor Diokno has reiterated that he would likely keep policy rates untouched over the course of the next two quarters with real policy rates now negative at 0.25 percent and after rolling out a series of aggressive rate cuts in 2020. Diokno did note that he would take the latest inflation reading and next week’s 3Q GDP report into consideration at their next policy meeting but we forecast a pause from BSP well into 2021,” Mapa said.

“We expect inflation to settle at 2.4 percent for the year as anemic domestic demand to keep a lid on price gains with BSP content with providing liquidity support via its bond purchase program to help stimulate the recovery,” he added.

Noelan Arbis, HSBC economist, said the BSP is “likely to keep its policy rate unchanged throughout 2020 but expect a 25 basis points (bps) cut to 2.00 percent in the first quarter of 2021.”

“Governor Diokno said risks to inflation are still tilted to the downside due to ongoing disruptions from COVID-19 domestically and globally. Moreover, headline inflation has averaged 2.5 percent year-to-date, which remains on the low-end of the BSP’s 2-4 percent target range. As a result, we believe it is more likely that the BSP will look through today’s print, especially given that the surprise was mostly driven by one-off factors,” Arbis said.
Arbis added Philippine interest rates “are already at record-lows, and the economy is still on the very early stages of a recovery.”

“Local mobility data is among the weakest in the region and quarantine restrictions remain in place. Bank lending growth also continues to decline, despite low interest rates and ample liquidity in the market, which suggests that corporate and individual borrowers remain wary of adding leverage given ongoing economic uncertainties,” Arbis said.

“This means that containment of the virus domestically and a reopening of the economy are likely to be prerequisites before additional rate cuts lead to a pick-up in loan growth.

We expect a 25 basis points policy rate cut in the first quarter of next year as mobility restrictions are loosened further and the BSP looks to provide a boost to growth,” Arbis added.