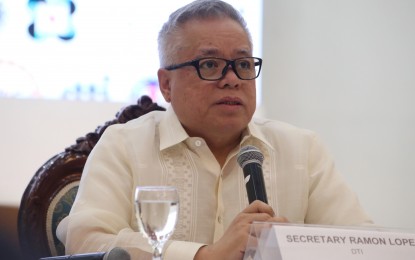 With the Philippines experiencing the deepest decline in growth and would possibly be the last to recover among the countries in the region, the Department of Trade and Industry (DTI) said businesses continue to suffer with up to 50 percent closing down since the start of the year.

Although these observations are anecdotal, Lopez expressed fear on what these closures reflect on the state of businesses and the eventually their impact to economic recovery.

“We might really be the last to recover if restrictions continue,” said Lopez at the Laging Handa press briefing yesterday.

As of November, just 5 percent of businesses have remained closed and most of those that have been operating have recovered up to 80 percent of their pre-pandemic sales.

But as of January, the proportion is back to 50 percent.

“This is alarming for the economy especially if these stores had permanently shut and the business owners have totally given up, I hope the closures are temporary,” Lopez said.
Lopez said he has asked a team from the DTI to conduct another round of survey this week. The findings will be released mid-February.

Lopez moved for the easing of age restrictions starting February 1, The Inter-Agency Task Force on the Management of Emerging Infectious Diseases had issued a resolution allowing children aged 10 and above to go out, accompanied by their parents on weekends, in areas declared under modified community quarantine (MGCQ) to help stimulate spending,
Lopez also said depending on the number of cases of the new coronavirus disease 2019 in January, he is open to deescalate Metro Manila to MGCQ also by next month.

Lopez’ stance takes into account the impact of restrictions on economic recovery,

“The Philippines registered the steepest decline in GDP growth …. we were second fastest growing and now we are at the bottom. We have to rethink and consider easing the restrictions,” Lopez said.

He added restrictions could eventually backfire as these will lead to lost jobs and lost incomes that would later lead to hunger, malnutrition and increased poverty.

More questions than answers: PDEA, PNP in the dark on misencounter