With about $4 billion (P200 billion) lost business through August, the Semiconductor and Electronics Industries of the Philippines Inc. (SEIPI) is making a last-ditch plea to the Senate to retain incentives to exporters until they recover from the pandemic.

SEIPI also echoes the call of the Philippine Economic Zone Authority (PEZA) to separate the perks given to export firms from those granted to domestic companies,
In a statement, SEIPI president Dan Lachica said the group supports the immediate reduction to 25 percent of the corporate income tax (CIT) rate under the proposed Corporate Recovery and Tax Incentives for Enterprises (CREATE) but is concerned about CREATE’s proposed incentives rationalization and its effects on the competitiveness of the electronics industry. 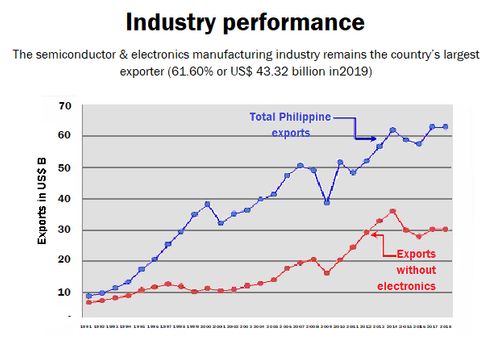 Lachica said the industry in the beginning of the year was on track to grow 5 percent but due to the pandemic is now experiencing a 15 percent contraction.

Lachica said about $500 million worth of volumes which were transferred to other countries may not be recovered.

About 1,000 jobs are affected by the decision.

SEIPI estimates job losses in the group in the first year of the implementation of the uncentives rationalization could reach 38,000 (direct) and another 266,000 (indirect) as companies are seen shifting their operations to Vietnam.

Lachica also said SEIPI supports calls of PEZA that exporters should have incentives that are distinct from those given to domestic companies .

In a separate statement on Monday, PEZA director-general Charito Plaza said exporters compete in a global market and face tougher competition from international competitors, while domestic market only focus on local consumers and few competitors.

“As efficiency-seeking investors, exporters consider incentives as compelling factor in their decision to locate in a certain country including cost of doing business and labor productivity.

(Incentives are) a crucial factor for export-based investors as part of ease and cost of doing business. Changing tax incentives (of domestic companies) won’t be large threat to the economy because they don’t necessarily leave the country and transfer capital,” Plaza said.

Lachica took note of the manifestation on Monday of Sen. Imee Marcos, Senate committee on economic affairs chair, who called for the outright deferment of the rationalization of tax incentives on the Constitutional grounds, and a review of proposal by other senators for the inclusion of “grandfather” clause for existing investors. This clause will enable enterprises which are already registered to continue enjoying their existing incentives.

Marcos said exporters will bear the brunt of the so-called “rationalization” of the tax incentives whose revenues have plunged 49.9 percent last April.

“While these factories have so far retained most of their workers, the semiconductor industry as a whole anticipates thousands of layoffs next year, as investors unwind existing plans and freeze any further investments,” Marcos added.