The gross revenue of industries posted a double-digit decline in the fourth quarter of 2020, as the economy continued to feel the impact of the coronavirus disease 2019 (COVID-19) induced crisis. 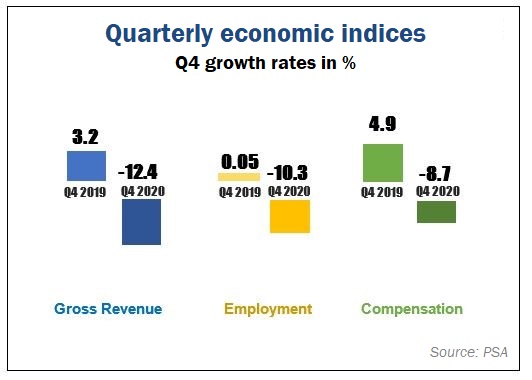 Data released by the Philippine Statistics Authority (PSA) showed the gross revenue index of industries declined by 12.4 percent in the fourth quarter of 2020 as compared with the 3.2 percent growth recorded in the same period of the previous year.

Among the industries, other services posted the largest drop of 32.1 percent. This was followed by declines in transportation, storage and communication by 29.6 percent, real estate by 27.3 percent and electricity, gas and water supply by 10.9 percent.

The PSA also reported a downturn of 10.3 percent in the total employment index during the period.

Transportation, storage and communication recorded the largest contraction of 23.6 percent. This was followed by declines in other services with 18.3 percent, trade with 9.8 percent and real estate with 3.7 percent.

Other industries contributing to the decline were transportation, storage and communication which dropped 25.2 percent, and other services and trade which posted contractions of 15.7 percent and 8.1 percent, respectively.

Karl Kendrick Chua, acting socioeconomic secretary, said at the start of the year while the economy performed better in the fourth quarter, with a smaller contraction compared to the earlier two quarters amid the further reopening of businesses and wider accessibility of public transport, it also shows the limits of economic recovery without any major relaxation in the quarantine policy.

The National Economic and Development Authority (NEDA) has been pushing to further reopen the economy to support the recovery of the country amid the pandemic.

Chua, who is NEDA chief, earlier said in the National Capital Region and adjacent regions, every day of general community quarantine is equivalent to P700 million in wages, salaries and other income lost.