Stockbroker SB Equities Inc. sees sustained growth in overseas Filipino (OF) remittances in the medium-term as economies open up and slowly recover from the impact of the coronavirus pandemic by next year.

SB Equities said its review of Philippine remittances data between 2000 and present showed that as economies expand, so do remittances.

The increase in remittances redound to an increase in household consumption, “which in turn augurs well for domestic demand and economic performance,” SB Equities said.
Remittances “tend to bounce back after episodes of downturns,” the stockbroker added.
In the past four decades, it noted there were only three years when overseas cash remittances incurred negative growth – 1984, 1999 and 2001. 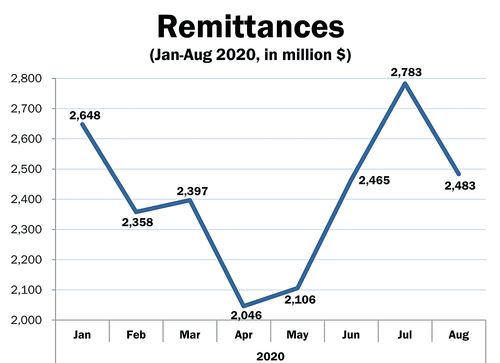 “From the historical series, we infer that overseas Filipino remittances tend to immediately rebound following episodes of downturns,” it added.

According to SB Equities, remittance figures overshot projections from both the World Bank and the Asian Development Bank (ADB).

In April, the World Bank said a 20 percent decline in global remittances is expected this year due to the lockdowns and pandemic. The ADB announced in August that OF remittances into the country “could contract by as much as 20.2 percent under a worst-case scenario of one year in controlling the coronavirus outbreak and resuming economic activity.”

“Against this backdrop, we believe the expected growth in OF cash remittances next year is likely to be sustained over the medium to long term as both domestic and global economies recover from the pandemic,” SB Equities said.

It expects remittances to rebound to $31 billion by next year on renewed economic activity.