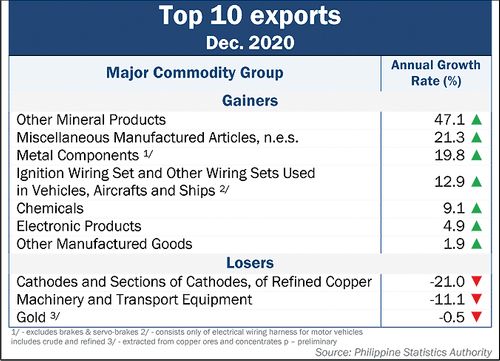 The country’s total trade fell by 18.2 percent in 2020, with imports and exports posting double-digit decline amid the global impact of the coronavirus disease 2019 (COVID-19) pandemic.

“For full year 2020, the trade deficit nearly halved to $21.8 billion from $40.7 billion in 2019, reflecting the impact of the COVID-19 pandemic, particularly on import demand as a result of the deep economic recession,” Nomura said in its research note, written by Euben Paracuelles and Rangga Cipta.

In December alone, the PSA said that the country’s total external trade in goods amounted to $13.66 billion, which dropped at an annual rate of 5.6 percent. This was slower than the annual decrease in the previous month at 9.9 percent. In the same month in 2019, the annual growth rate was recorded at 6.1 percent.

The Philippines’ total export sales in December meanwhile amounting to $5.74 billion, decreased at an annual rate of 0.2 percent, from a four percent annual increase in the previous month and a 21.6 percent year-on-year hike in December 2019.

“The surprise to our forecast in December’s export growth was mainly driven by weak agriculture export growth, which worsened sharply to -46.8 percent year-on-year from -1.7 percent. This reflects the impact of the typhoons and flooding on agriculture output, which in our view is easy to underestimate,” Nomura said. “Electronics export growth improved slightly to 4.9 percent from 4.6 percent, suggesting continued benefits from the global tech upcycle but to a lesser extent than other regional exports,” it added.

Total imported goods in December, which amounted to $7.92 billion, remained at downtrend with an annual drop of 9.1 percent.

The value of imports registered a negative annual growth rate for 20 consecutive months since May 2019.

In November 2020, the annual decline was higher at 18.3 percent while in December 2019, imports decreased by 2.1 percent annually.

“The improvement in import growth, however, was not broad-based, as it was primarily led by electronics-related imports, in line with the improvement electronics exports. However, we still see limited signs of an infrastructure-led boost on imports,” Nomura said.

Thus the balance of trade in goods, or the difference between the value of export and import, in December 2020 amounted to $2.18 billion, representing a trade deficit with an annual decline of 26.4 percent.

The trade deficit fell at a faster rate in the previous month at 52.7 percent and in December 2019 at a drop of 29 percent.

“The net effect of these trends will mean that the 2021 trade deficit remains below the pre-COVID-19 of $3.1 billion, which in turn would be supportive of PHP as corporate demand for the dollar remains soft,” Mapa said. “Meanwhile, the slight widening of the trade deficit will be a negative for 4Q 2020 gross domestic product (GDP) figures, which are set for release on Thursday. ING is expecting 4Q GDP to contract by 10.4 percent, bringing the 2020 full-year decline to 10 percent,” he added. (A. Celis)

MOU to deter sale of fakes

PBA staff to be cited for bubble work