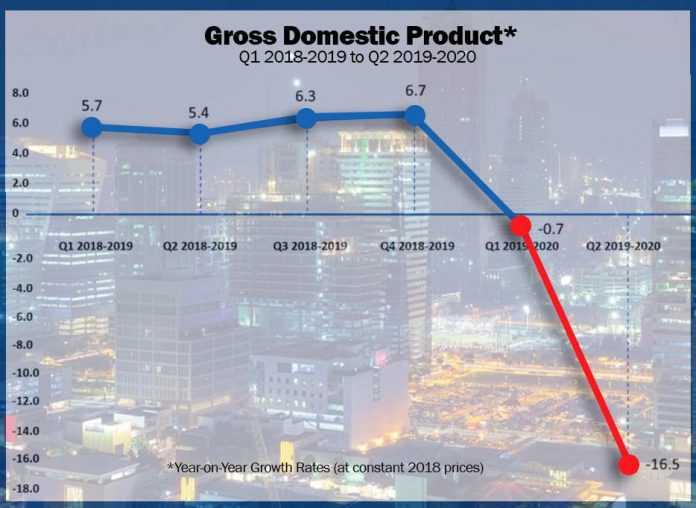 The economy in the second quarter posted the sharpest slump for a quarter period on record due to the economic impact of lockdown measures imposed starting March amid the coronavirus disease 2019 (COVID-19) pandemic.

The Philippine Statistics Authority (PSA) yesterday reported the country’s gross domestic product (GDP) contracted 16.5 percent in the second quarter of 2020, the lowest figure posted based on available quarterly data which starts from 1981.

The country has also entereda recession after posting two successive quarters of decline in the first semester.

The lockdowns, intended to minimize the spread of COVID-19, have resulted in a slowdown in economic activity, as many businesses had to temporarily suspend operations, while some had to permanently close. Many individuals also lost their sources of income during the period.

“This decision (of placing a large part of the economy in enhanced community quarantine or ECQ) is worth the lives saved. It prevented an estimated 1.3 to 3.5 million cases, of which an estimated 68,000 severe and critical cases at the peak day would have overwhelmed our health care system,” Karl Kendrick Chua, acting socioeconomic planning secretary, said in a virtual briefing with reporters yesterday.

Dennis Mapa, PSA undersecretary and national statistician, said in a separate virtual briefing the last time the Philippines had a double-digit negative growth in a quarter was during the latter years of the Marcos regime.

Mapa also confirmed this is the first time the country is in recession since 1991.

The PSA report showed the main contributors to the decline were manufacturing, -21.3 percent; construction, -33.5 percent; and transportation and storage, -59.2 percent.

Among the major economic sectors, only agriculture, forestry and fishing increased with 1.6 percent growth.

Industry and services both decreased during the period by 22.9 percent and 15.8 percent, respectively.

Meanwhile, Carlos Dominguez, Department of Finance secretary, said while the government knew that lockdowns and strict quarantine measures would hurt the economy, it acted swiftly to save lives and protect communities.

“Without continued and increased public-sector spending, especially on infrastructure, public health and social protection, our economy would have performed much worse, and the first semester GDP would have shrunk by 2.5 percentage points more than it did, or a total of 11.5 percent versus the actual 9 percent,” Dominguez said.

The finance chief also said the pain is shared across borders as, among the credit-rating peer group, the Philippines’ economic performance for the first half of the year roughly falls within the middle of the pack, at negative 9 percent.

“Among our credit rating peers, first semester numbers showed contractions among the economies of Italy by 11.6 percent, Mexico by 10.2 percent and Indonesia by 1.2 percent,” Dominguez said.

“We are not alone in our struggles, although the unique fiscal and macroeconomic strategy and strengths with which we entered 2020 will continue to provide us with solid footing as we confront economic challenges,” he also said.

“Although the first semester figures underscore the challenges ahead of us, with the public’s cooperation and if we work together to shore up consumer confidence, we will deliver better economic outcomes in the final half of this year,” he added.

`The worst is behind us’

“I believe the worst is behind us. But we’re not out of the woods yet,” according to  Benjamin Diokno, Bangko Sentral ng Pilipinas Governor, yesterday said the GDP numbers for the second quarter  “were largely due to the comprehensive lockdown during the quarter.”

“As we gradually reopen the economy, economic activity has started to pick up. No doubt, given the sharp drop of the economy in Q2, I’m convinced that Q3 will be better than Q2, and that  Q4 will be much better than Q3,” Diokno said.

Diokno stressed that the days of comprehensive, nationwide lockdown “are over as it exacted a heavy damage to the economy, jobs, livelihoods, and incomes.”

“The focus of national leaders should be on more localized village level or building level containment. Isolation facilities should be built in all major cities and large municipalities, in support of the government’s test, trace and treat strategy,” he added.

Trade Secretary Ramon Lopez said the second quarter GDP result is expected given that the whole country was on different stages of community quarantine during the period.

Lopez said with the strict lockdown introduced towards the end of the first quarter and which continued to the second quarter, industry including manufacturing and construction, and services sectors were the most affected because of their closures.

The industrial sector accounts for 28 percent of GDP in terms of value, with manufacturing accounting for more than 60 percent of industry.

In terms of employment, industry accounts for about 17 percent of the national total—with manufacturing and construction each accounting for about half of this.

“We also recognize that we are now on the second phase where the general direction is toward safe and gradual reopening of the economy, as we want to bring back jobs for our countrymen, but still ensuring strict health protocols. But in the process of managing and dealing with virus, we just have to adjust and calibrate our moves, that is, to move forward, but can step back, when needed, until we have the vaccine,” Lopez said.

He said as long as the quarantine restrictions are eased, industry is expressing optimism—as the 12-month outlook for production (Future Outlook Index) was broadly positive in July when the National Capital Region and Mega Manila were at GCQ.

Francis Chua, director for international affairs of  the Philippine Chamber of Commerce and Industry, said the decline in GDP is “expected.”

“Under GCQ (general community quarantine), the economy have shown signs of recovery. Although we are back to MECQ (modified ECQ), we hope after August 18, we can be back to road of recovery,” Chua said.

Francis Lim, Management Association of the Philippines president, said the government “should not also leave any stone unturned to regain public confidence as our economy is principally driven by domestic consumption.”

“A stimulus package like the ARISE (Accelerated Recovery and Investments Stimulus for the Economy) that was endorsed by more than 40 local and foreign business groups, supported by 5 cabinet secretaries and approved by more than 90 percent of the House membership is really needed for the economy to bounce back at the soonest possible time. We have been saving for the rainy days and now is the time to spend. Funding for ARISE can be staggered and partly supported by borrowings which, under a Supreme Court decision, can be done,” Lim said.

In Malacanang, Communications Secretary Martin Andanar and presidential spokesman Harry Roque said the contraction of the economy in the second quarter was understandable and already expected.

Roque said Malacanang is concerned about the “steep drop which is much worse than what our government economists had expected” but said that the situation is not limited to the Philippines.

He said other nations such as Singapore, Indonesia, the United States, France, Spain, Mexico are also facing the same economic situation.

“The Palace is aware of the hardships and the sufferings of our people. We thus provided an emergency subsidy program, which is considered the largest single relief program in the country’s history, when we took the painful choice of imposing the strictest quarantine measure on our people. Our resolve to recover at the soonest possible, however, remains strong,” Roque said.

Roque assured the public that the administration is working hard to enable the economy to recover and had already put together a phased and adaptive economic recovery program through the PH-Progreso or the Philippine Program for Recovery with Equity and Solidarity.

Andanar said while the lockdowns affected the economic performance, it was necessary to protect health and well being of everyone which resulted in the saving of some 1.3 million to 3.5 million lives as well as “suppress the collapse of our health system and assist our frontline health workers who have been tirelessly responding to the pandemic.”

No quick turnaround in consumption

The second-quarter slump was lower than the consensus of both local and international economists.

Nicholas Mapa of ING Bank Manila said the Philippines “crash-landed into recession” with the 2Q GDP meltdown showcasing the destructive impact of lockdowns on the consumption-dependent economy.

“With record-high unemployment expected to climb in the coming months we do not expect a quick turnaround in consumption behavior, all the more with COVID-19 cases still on the rise,” Mapa said.

He added that with consumption cratering by 15.5 percent, “investor sentiment will likely go into freefall with the recent investment boom snuffed out by the pandemic.”

“Given that household spending is expected to be sidelined for the foreseeable future due to a fractured labor market and a downturn in remittances, the Philippine economy is likely headed for a base effect-induced bounce in 2021 and a return to the lower 3.5-4.5 percent growth trajectory of yesteryear,” Mapa said.

Kanika Bhatnagar and Sanjay Mathur, economists of Melbourne-headquartered ANZ, said the plunge in Q2 GDP growth and the sluggish pace of recovery “will require a recalibration” of their forecasts.

“The growth outlook is challenging. Recent reimposition of mobility restrictions on back of surging infections will impede growth recovery. Real-time indicators signal a very modest improvement. Private investment is likely to remain weak as well on the back of subdued business sentiment and excess capacity,” they said.

They stressed that aggregate demand will have to be boosted by increased fiscal spending which remains below potential.

“Last year spending had dropped due to midterm elections and in this context, even the 22.1 percent increase in Q2 appears inadequate. There is scope to further ease monetary policy but its impact is likely to be milder.”

Noelan Arbis, HSBC economist, said Q2 GDP results were “a shocking print” that not only exceeded market expectations “but marking one of the biggest economic contractions reported globally as a result of COVID-19.”

“(The) GDP print points to the need for an ‘all hands on deck’ approach to boosting the economy. The lack of a significant fiscal stimulus is particularly concerning for the country, which now appears to be the region’s hardest hit economy due to the pandemic. We believe the absence of a big-ticket stimulus program could weigh on growth this year and a future recovery,” Arbis said. (With J. Calapati and J. Montemayor)

Feasting on a budget