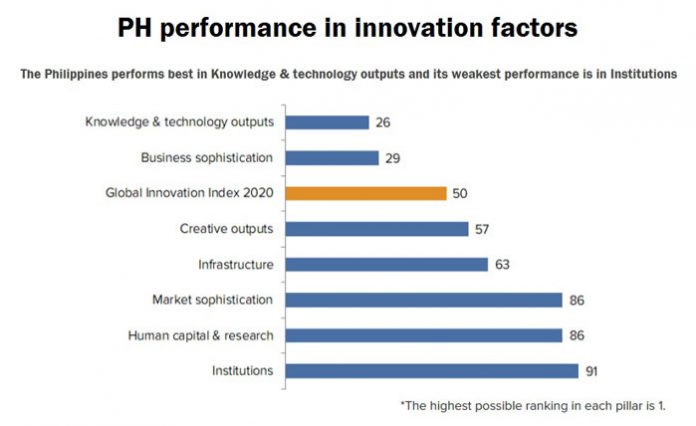 The Philippines moved up four notches to 50th among the world’s most innovative nations this year from 2019, its best rank so far.

The Philippines fourth among the 29 lower middle-income group economies and 11th among the 17 economies in Southeast Asia, East Asia and Oceania.

The country China, Vietnam and India which have made the most significant progress in the GII innovation ranking over time.

The Philippines for the second consecutive year performed above expectations for its level of economic development.

The Philippines also ranked No. 10 in the creative goods exports.

The country was ranked with China, Vietnam and India as making the most significant progress in the GII innovation ranking.

The GII is co-published by Cornell University, the World Intellectual Property Organization and INSEAD (Institut Européen d’Administration des Affaires) or the European Institute of Businessministration, a prestigious international business school.

The Philippines stood out in the areas of innovativeness of its business sector and the innovation outcomes produced by its investments, with the levels of outcomes even surpassing some high-income economies, the GII 2020 observed.

Compared to other economies in Southeast Asia, East Asia and the Pacific, the Philippines performed above average in the pillars of business sophistication and knowledge and technology.

The overall performance earned the Philippines the 11th slot among the 17 economies in these regions.

According to the GII 2020, the country performed beyond expectation as it grabbed the 6th slot in productivity growth, 7th in firms offering formal training and 8th globally in utility models by origin.

For the human capital and research pillar, the Philippines ranked 22nd in the category of tertiary education in terms of graduates in science and engineering.