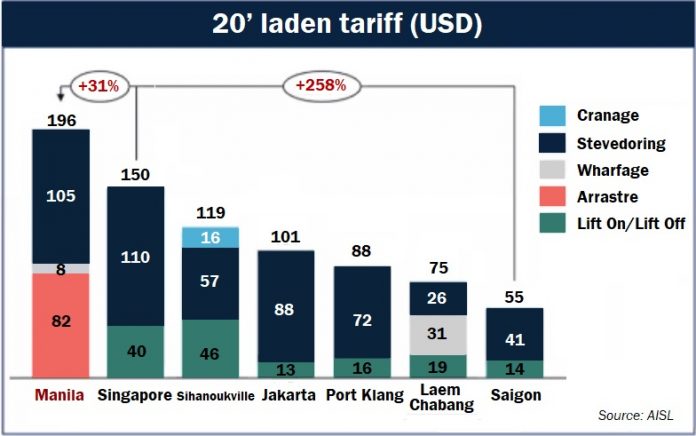 The Philippines has the highest shipping logistics costs in Southeast Asia and a recent government imposition could add more to the burden of exporters.

Henry Basilio, chairman of the networking committee on transportation and logistics of the Export Development Council (EDC) presented the comparisons made by the Association of international Shipping Lines at the Philippine Exporters Confederation Inc. general membership meeting last Tuesday.

Basilio said for the same shipment, within the Philippines, Manila has the highest tariff which is 25 percent more than in Batangas and 223 percent higher than in General Santos.

He said for empty containers, Manila also has the highest tariff in Southeast Asia at $89, 13 percent higher than in Singapore which charges $79 and 157 percent versus Vietnam whose tariff is $34.

In a Dec. 15, 2020 Administrative Order 12-2020, the Philippine Ports Authority implemented new fees for the handling of foreign empty containers at the Manila and Batangas ports.

Basilio said while the rates are lower than what were earlier proposed, the EDC continues to argue empty containers are part of a ship’s gear and has been levied in the stevedoring costs and should no longer have any arrastre charges.

Paras leaves UP, tries to hack it anew in the US