The World Bank sees an even worse contraction for the Philippines this year than earlier projected, noting recovery is also expected to be “much slower” versus regional peers as the country has “not succeeded in controlling the coronavirus disease 2019 (COVID-19).” 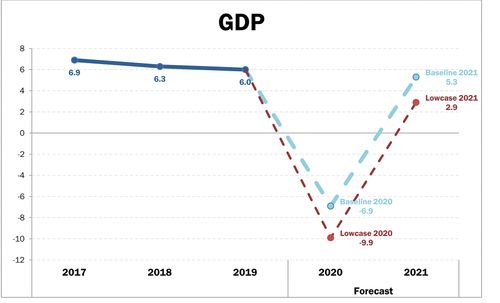 In its report, World Bank East Asia and Pacific Economic Update, released yesterday, the agency said the Philippine economy is seen to contract by 6.9 percent this year, and recover by 5.3 percent in 2021.

This refers to a scenario of severe growth slowdown followed by a strong recovery.

However, under a “lower case,” or a scenario of deeper contraction followed by a sluggish recovery, the World Bank report showed the Philippine economy could post a decline of 9.9 percent this year, followed by a weak growth of 2.9 percent in 2021.

In its Philippine Economic Update in June, the Washington-based agency projected a contraction of 1.9 percent for the Philippines this year, followed by a 6.2 percent growth next year.

The World Bank said in its report the pandemic has so far been contained in parts of the East Asia Pacific region, but not in Indonesia and in the Philippines, and is still a threat to other countries.

In a virtual briefing with reporters yesterday, a bank official said recovery for the Philippines and Indonesia will be much slower versus their regional peers, with both countries facing the prospect of an uneven and volatile economic recovery.

“Recovery will be relatively fast, even V-shaped, in countries like China and Vietnam, because they have successfully contained so far the disease, and have created the capacity to contain subsequent outbreaks, not through extremely restrictive measures, but through more targeted tracking, testing and isolation. In these two countries, you might see quite soon a recovery pre-COVID-19 levels of output,” Aaditya Mattoo, chief economist for East Asia and the Pacific, said.

“It is in countries like Indonesia and the Philippines that recovery will be much slower. First again, because they have still not succeeded in controlling the disease, but also especially in the Philippines, there is heavy exposure to the outside world, a dependence on tourism, a dependence on remittances, and these will deepen the economic pain,” he added.

Mattoo noted the need to build capacity for smart containment, even in countries which haven’t done so yet.

“(You) need to be able to test, trace and isolate because that’s the only way to contain without disrupting economic activity,” he said.

In a separate virtual briefing, Rong Qian, World Bank senior economist in the Philippines, said on a technical level, the return to the pre-COVID gross domestic product level in the Philippines is expected to be seen at around the end of 2021.

“The Philippines relies on tourism and also service export and trade export, so it’s more exposed to the global demand than in Indonesia, and also from the last six months the Philippines has been in stricter lockdown then Indonesia as well,” she added.

The World Bank said social assistance to poor and vulnerable families as well as micro and small enterprises will help cushion the impact of COVID-19 and hasten recovery in the Philippines.

The bank said recovering from the pandemic requires effective public health management and social protection measures in the immediate and resuming the government’s strong emphasis on human capital investments and infrastructure that characterized the Philippines’ successful growth story pre-COVID.

“In the short-term, every peso put directly in the hands of poor and vulnerable families through social assistance translates into demand for basic goods and services in local communities, which in turn supports micro and small enterprises and the government’s recovery efforts,” said Ndiamé Diop, World Bank country director for Brunei, Malaysia, Philippines and Thailand.

“At the same time, one cannot overemphasize the importance of improvements in public health management including testing, tracing isolating, and treatment to effectively control the spread of COVID-19 and secure a definitive recovery,” he added.

Diop said investing in the infrastructure of social services and assistance delivery – such as the foundational identification system, digital mobile access and transaction accounts – would help ensure that social protection measures directly reach poor and vulnerable families when they need it.

As for the forecast for 2021, Qian said the assumption is the gradual reopening of the economy will continue, and that COVID-19 is under management.

“The downside scenario is the risk of reversal to a strict lockdown, and a slower recovery or deeper recession of the global economy,” she added.

Qian also said the third quarter of 2020 is expected to be better than the second quarter performance.

“I think we can observe that some part of the economy is reopening. Also, the high frequency data on trade, on fiscal revenue has also shown a recovery. So we hope this recovery will (be) sustained after most of the country is in general community quarantine (GCQ),” Qian said.

Meanwhile, the National Economic and Development Authority (NEDA) has a similar view on the third quarter performance, although it will still likely post a year-on-year contraction.

“We are hoping that it would be better than the second quarter, but we don’t think that it will still be positive on a year-on-year. Quarter-on-quarter, it will be definitely positive, looking at the results of the July labor force survey,” Rosemarie Edillon, NEDA undersecretary, said in a virtual press conference yesterday.

“Year-on-year, looks like it will still be negative. We are looking at indicators such as the purchasing managers index, it’s still below the 50 mark. And then the business expectation survey…It was already reported by the Bangko Sentral ng Pilipinas as well. The National Capital Region was placed back on modified enhanced community quarantine, and then until now we’re still on GCQ,” she added.

Edillon, however, said government is hoping that as people get the hang of complying with the minimum health standards, it can justify the opening up of more sectors.