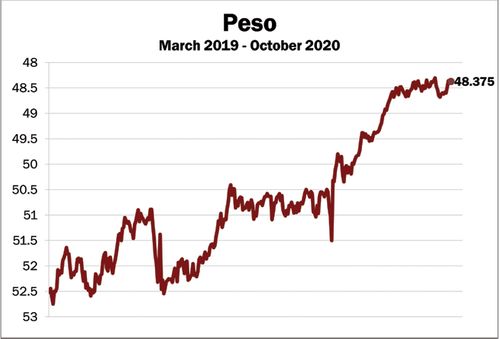 Fund manager ATR Asset Management Group (ATRAM) expects the peso to remain overvalued in the near term amid an expected external borrowing by the government to finance its avowed infrastructure spending under the Build, Build, Build program.

“Our view is the government will move to a less restrictive quarantine in the fourth quarter but as the fiscal stimulus strategy, i.e. Build, Build, Build gets underway, this may still require additional external debt, which will continue to mean capital inflows that may partially negate the downward pressure on the local currency and keep it still overvalued relative to other currencies in the short-run,” said the asset management group.

ATRAM added the peso continued to appreciate in the third quarter on the back of weak demand for the dollar and sustained flows from both overseas Filipino worker remittances and capital flows from borrowings from the Philippine government and the private sector.

“The peso had appreciated close to 4 percent quarter on quarter in the third quarter amidst a 2.4 percent year on year decline on remittances and 48 percent narrowing year on year of the trade deficit in the seven months of the year, respectively,” it said.

The Philippine bond market will track the trajectory of the global bond market, “absent any surprises in inflation data,” ATRAM noted.

“We expected broad global recovery will support for a gradual increase in rates and a steepening of the yield curve due to better growth prospects,” ATRAM said.

“In the short-term, however, we view significant correction in yields as a tactical opportunity to reinstate duration positioning absent real improvements in the economy,” it added.

“Despite ample market liquidity in the system, the surprise policy cut has helped push government borrowing cost even lower ahead of the 10-year FXTN (fixed rate treasury notes) and jumbo 5-year RTB issuance by the Bureau of Treasury. Supportive policy actions have helped cushion market temperament of the dismal economic growth data posted in the second quarter,” it said.

“Since then, leading economic indicators have shown that an economic rebound is on its way with manufacturing PMI back to expansionary phase. Given the benign inflation environment, policy head room for further accommodation remains possible. In our view, the worst for the economy is likely over and we anticipate further improvement in data as we head towards the fourth quarter,” it added.

The Philippine stock market, meanwhile, is expected to get some support from improving economic environment. In the past two months, ATRAM noted sequential improvements on the health and macro data, such as better-than-expected unemployment and remittances data, which support an optimistic outlook for the stock market.

“Now combining this with an expected potential relaxation of the quarantine status of Metro Manila by end of October and less heavy foreign selling pressure versus the previous months, the market might see some support from here,” it said.

Still, ATRAM said, uncertainties linger as to whether the coronavirus disease 2019 (COVID-19) cases could sustainably be flattened.

“Moreover, the moratorium on debt payments is massively masking the level of economic feasibility of some businesses with their subdued revenues (with some struggling to even reach 50 percent of pre-COVID levels),” it added.