The combined peak demand for power of the Luzon and Visayas grids has breached last year’s level, hitting 12,586 megawatts (MW) against the previous 12,423 MW, a 1.3 percent growth.

Data from the Independent Electricity Market Operator of the Philippines (IEMOP) said peak demand for the month was recorded last September 8 and may still be breached further.
Robinson Descanzo, IEMOP trading operations head and acting chief operating officer, said in a virtual briefing yesterday this indicates economic activities have started to recover.

“I think this is a good sign that we are slowly recovering and we hope that this would be sustained in the following months… Since Christmas is fast approaching, we expect that manufacturers will now be active in preparation for the holidays,” he explained.

He mentioned that with the higher demand, average price of electricity sold in the wholesale electricity spot market (WESM) may improve to P3.64 per kilowatt hour (kWh) from last month’s P1.97 per kWh. 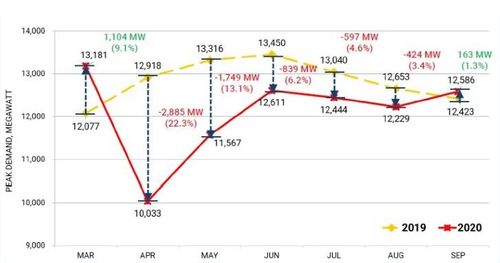 However, Descanzo said that further demand improvement may be tempered with the expected La Niña phenomenon to hit the country as it will cause cooler temperatures and will discourage the conduct of several activities due to rain.

He noted that among the positive outcomes that will be caused by the expected more rainfall in the coming months is the higher production of hydro power plants which could displace costlier power being offered by other sources.

Meanwhile, the IEMOP boss shared that average demand, supply and price of electricity in the WESM decreased in August from July.

IEMOP is a non-stock, non-profit corporation governing the WESM for its mandate to have a transparent, fair, competitive and reliable market for the trading of electricity in the country. – Jed Macapagal