The funding required to bridge the gap in electricity access in the country is significant, the United Nations Economic and Social Commission for Asia and the Pacific said, with one estimate of a cited 2019 report amounting to $1.25 trillion, or roughly P60 trillion.

According to the “Regional energy trends report 2020: tracking SDG 7 in the Asean region” posted on the agency’s website on December 16, the country’s rural areas present the greatest challenge to achieving universal access and quality energy services.

“Even for areas with connections to the national grid, supply has not kept up with demand, and millions of power consumers suffer regular brownouts,” the report said.

“Access is particularly challenging in off-grid missionary areas with small, dispersed populations, often located in areas most prone to natural disasters,” it added.

The report cited a 2019 figure from Sustainable Energy For All, amounting to $1.25 trillion, for the funding needed to close the gap in access to electricity. 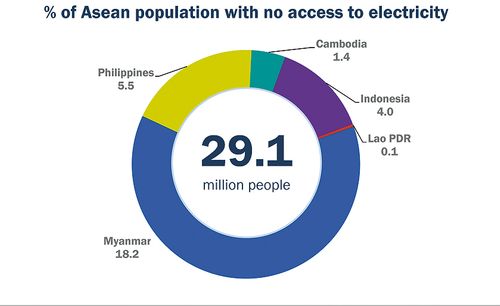 “Public funding is insufficient and increased private sector engagement is needed. However, the government has strict regulatory controls in place for electrification that are applied to large and small projects, which creates high transaction costs for small off-grid projects, making them less commercially viable,” the report said.

“Streamlined provider accreditation and project procedures, together with improved access to financing mechanisms, could help to build a more enabling environment to support the achievement of universal access,” it added.

The study said emerging to face some of these challenges is distributed solar power generation and storage development, with social enterprises at the center.

“In remote regions, solar home systems and renewable energy mini-grids have become increasingly viable and cost-effective options to meet the basic need for electricity as well as to support productive uses. The responsibility for electrification in some areas may be given to private qualified third-party providers, while regions considered unviable are covered by the National Power Corp.,” the report said.

“For fiscal year 2021, the government has put forward funding to electrify more than 1,000 sitios and 400,000 new customers, although funding levels fall short of what is needed to achieve total electrification in the near-term,” it added.

The Philippines Development Plan 2017-2022 prioritizes the provision of electricity services to the remaining unelectrified off-grid, island, remote and last-mile communities, with a goal to achieve universal household electrification by 2022.

Earlier this month, Sen. Sherwin Gatchalian, Senate committee on energy chairman, proposed a bill that seeks to remove barriers to the development of microgrid systems in the country, to help achieve the government’s thrust of providing electricity access to all Filipino households by 2022.

Under his proposed Microgrid Systems Act, microgrid systems providers will be allowed to operate in any area where there is either no electricity access at all or where the power connection does not provide 24/7 electricity supply.

Gatchalian said a microgrid system is well-suited to electrify unserved and underserved areas in the absence or insufficiency of main grid connections and promotes the use of local energy resources for power generation such as solar, wind and even biomass.

Citing data from National Electrification Administration indicate that there are still 12,672 unelectrified on-grid sitios as of June 2020 while there are 5,262 identified off-grid and remote areas for electrification as of November this year.

Under the agency’s proposed 2021 national budget, an allocation of P1.7 billion is needed to cover the electrification of 1,153 sitios.

However, Gatchalian said “if the same amount is given by the national government every year, then it would take close to 10 years to electrify all these sitios and these sitios are bound to increase due to population growth.”

He said allowing the installation of microgrids will spare the government billions of pesos in spending as it will allow private investors to enter the market.